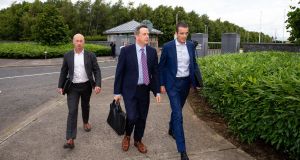 The beef price crisis has moved closer to a resolution following concessions by the meat industry on two of the three points of contention.

Talks were held earlier this week between Meat Industry Ireland, the representative body for processors, and farmer organisations, including the grass-roots movement Beef Plan, which organised pickets of factories over the summer.

Negotiations got under way on Monday after beef farmers, who claim they are not getting a fair price for animals at the factory gate, agreed to suspend their picket. For its part, the meat industry suspended threats of legal proceedings against the protesters.

A communication issued by the Department of Agriculture on behalf of the independent chairman of the talks Michael Dowling, which has been seen by The Irish Times, outlined the next steps agreed to be taken after broad agreement was reached on a range of issues.

Talks planned for this week were pushed back to Monday as three outstanding issues remained in contention. Meat Industry Ireland was to consult with its members on bonuses paid for cattle under 30 months, which farmers say arbitrarily limits their income and is based on flimsy evidence.

The processors were also to be consulted on sharing more information about the weight of animals prior to slaughter, and whether verbal contracts between factories and farmers could be replaced by written contracts.

A second communication outlined that the representative body had agreed to make concessions on these two issues, committing to weighing animals prior to slaughter for a nominal charge and to providing contracts between factories and farmers in written format.

Although the bonus issue remains outstanding, progress will be welcomed by all sides after Minister for Agriculture Michael Creed last week said the “current toxicity” would only see the industry “stumble from one crisis to another”.