Will Kerry be tempted by tasty DuPont food ingredients deal? 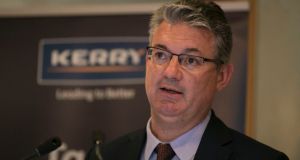 It’s not quite the Kerry way. But the Kerry Group , which has built up its global taste and nutrition business with annual sales of €5.4 billion through a series of small bolt-on deals over the past three decades, has been named as a possible bidder for a business that could double its size.

Bloomberg reported on Wednesday that Kerry would be among logical partners for the food additives and ingredients business that is being sold off by US specialty chemicals group DuPont de Nemours.

The mooted $20 billion (€17.9 billion) price tag on the DuPont nutrition and biosciences division is virtually the equivalent of Kerry’s €18.1 billion current market value, which is off 5 per cent of its all-time high reached in June.

Peers Royal DSM in the Netherlands, Switzerland’s Givaudan, the world’s largest operator in this global fragrance and flavours industry, and New York-based International Flavors & Fragrances (IFF), the second largest, count among other chief suspects likely to run the rule over the sixth or seventh-biggest player, according Bloomberg.

Kerry, which is due to report interim results on Thursday, currently ranks as number five, and a tie-up with DuPont Nutrition & Biosciences would propel it to the top of the league table.

Could a Kerry lifer such as chief executive Edmond Scanlon, a dairy farmer’s son who joined the group on a graduate development programme in 1996 and worked his way up to become chief executive almost two years ago, abandon its steady-as-she-goes mergers and acquisitions (M&A) strategy for a transformational deal like this? Unlikely.