Some 96,380 new private cars were taxed for first time between January and July, down 7% year on year 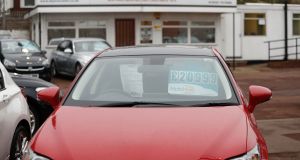 The Irish motor trade is under pressure as buyers look to the UK market for used cars, driven by sterling’s recent fall in value versus the euro. Photograph: Getty Images

The number of new cars taking to Irish roads fell 9.7 per cent in July compared to last month, according to the latest figures from the Central Statistics Office.

According to the figures, 96,380 new private cars were taxed for the first time between January and July, down 7.1 per cent on the same period last year.

The consensus in the motor trade is that even the most rudimentary study shows a correlation between the rate of sterling and new car sales. In the midst of Brexit turmoil, therefore, it’s hardly surprising that a weakened sterling is drawing buyers to buy in the UK.

So the Irish motor trade is suffering. As is the exchequer. It’s estimated that for every new car sold, the tax take is €10,000. For used imports it’s closer to €3,000. Even if many of these used buyers were not in the market for a new car, by buying locally the ripples would move up through the motoring food chain.

What the sterling link demonstrates is the price sensitivity involved in car buying. Every 1 pence sterling movement in the exchange rate to the euro will drive buyers to the North or Britain.

The Government is currently mulling over changes to the motor tax regime. It would be wise for the sages on Merrion Street to reflect on the incredibly fickle nature of the car buying market. Tweaking the system to meet long-term social and environmental concerns is sensible and necessary, but in doing so they need to be acutely aware of the the potential of unintended consequences. If they need reminding, there are dozens of former dealers who will regale them with tales of woe from the last time we overhauled the motor tax regime back in 2008.