Hershey may fulfil Irish snack company’s ambitions for US expansion 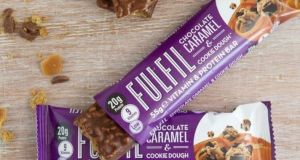 Disruption is the buzzword in today’s business environment. Every start-up wants to be that company that fundamentally changes how their industry operates.

In the Irish snacks business, Fulfil is such a company. It wasn’t the first protein-rich nutrition bar on the Irish market but, in less than three years, it has become a market leader.

More than anything, its success has been down to timing. Fulfil’s entry to the market in early 2016 came as traditional snacking options found themselves centre-stage in an increasingly animated discussion about health and nutrition.

It coincided with a surge in interest generally in fitness and exercise.

The timing was ideal for a high-protein snack option, low in sugar and with nearly two years’ product development behind it.

They also had the marketing nous of Richmond Marketing, the Barry Connolly-owned group behind the success of everything from Red Bull to Kopparberg cider and Fever Tree mixers. Connolly sees his business as spotting trends ahead of the posse and securing rights to market those products.

With the company’s founders, he had the background to help ensure Fulfil got on to as many shelves as possible supported by the sort of slick marketing campaigns that many start-ups can only dream about.

The company’s progress has been stellar – doubling turnover every year from an initial €12 million in 2016 to an expected €100 million this year – and its expansion has been aggressive.

But Monday’s deal, which sees US giant Hershey take a significant minority stake in the business, puts it in a whole new league.

For Hershey, it presents an opportunity to get a foothold in Europe, a key market for any truly global brand.

For Fulfil, apart from the cash investment, having the leading player in the US confectionary sector on your shareholder register opens the door to the biggest snacks market worldwide. Given the company’s rapid geographic expansion to date, it would be surprising if an assault on the US market was not in the works.