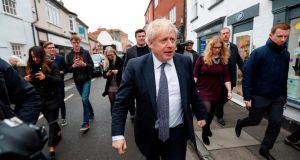 ‘If Boris Johnson wins a majority there’s not going to be much the MPs from Northern Ireland can do to stop him.’ Photograph: Getty Images

‘This could be a very interesting election in Northern Ireland” are not words you often hear from a political commentator. And yet, this one has the potential to be very interesting. That’s because the two main nationalist parties, Sinn Féin and the SDLP (with support from the Green Party), have reached an “arrangement” to maximise the collective Remain vote and deprive Leave MPs of their seats.

No one is describing it as a pact, because that conveys the impression of some sort of us-and-them sectarian headcount. Instead, it is being presented as a cooperative strategy whereby the wishes of the Remain majority in Northern Ireland will be properly represented at Westminster; albeit not by Sinn Féin MPs.

Yet, even though it is hung on the hook of Remain versus Leave it is, in essence, the usual old us-and-them pact. And that’s because the 10 Leave MPs are all DUP, while 7 of the 8 Remain are Sinn Féin.

So each DUP seat which falls, to either the SDLP or Sinn Féin, is not simply a victory for Remain: more important, it is a victory for nationalism. That’s why this pact – and there really is no other word for it – suits nationalism more than it suits Remain.

Let’s face it, if Boris Johnson wins a majority there’s not going to be much the MPs from Northern Ireland can do to stop him. And if he doesn’t win a majority, then Remain MPs who are abstentionists won’t stop him either.

The SDLP has big problems. It has no seats at Westminster. It doesn’t have much money. Its electoral prospects have been pretty bleak this last few years. It needs to find a way of making itself relevant again.

So a pact, which can be sold as something which isn’t really a pact at all, suits very nicely. It has stood aside in North Belfast, presently held by the DUP’s deputy leader Nigel Dodds. His majority is 2,081. In the 2017 election the SDLP (with a deliberately low-key candidate) polled 2,058. It’s not a bankable seat for Sinn Féin, but the chances of toppling Dodds have improved significantly.

Meanwhile, Sinn Féin has withdrawn in South Belfast, held by the DUP’s Emma Little Pengelly with a majority of 1,996 over the SDLP. If, as expected, the bulk of Sinn Fein’s 7,143 votes go to the SDLP, then another DUP scalp will have been claimed.

Both the SDLP and Sinn Féin, along with the Greens, have withdrawn in East Belfast, too, in favour of Alliance Party leader Naomi Long (although Alliance is not supporting what it describes as a pact): but it is unlikely she will defeat the sitting DUP MP. The Green Party has endorsed the SDLP in South Belfast and also withdrawn in North Belfast, presumably in favour of Sinn Féin.

Most observers – this one included – did not predict the SDLP/Sinn Féin “understanding”. It was probably made easier by the willingness of the Greens to participate and by the joint decision of both parties to step aside for Alliance in one constituency and for Lady Hermon (the pro-Remain Independent unionist) in North Down– although she has now stood down.

It was a subtle way of being able to promote the argument that it really was a Remain strategy rather than a mutually convenient nationalist pact. Both parties will still fight each other in seats where it is reasonably certain that only a nationalist can win; which ensures the best chance of maximising the overall number of nationalist-held seats.

Either of those results would be another massive political/psychological blow for unionism: following on from the loss of the unionist majority in the Assembly in 2017 and the loss of the second unionist MEP a few months ago.

The loss of Dodds

The loss of Dodds would be a particularly damaging blow, not just for the DUP; as would the reduction of DUP seats in Belfast from three to maybe just one or even none. Unionists have already been badly rattled by Johnson’s withdrawal agreement, which many refer to as the “surrender” or “withdrawal” agreement.

None of these outcomes are certain, of course. There is a route to the DUP being able to win 10 seats. The UUP could retake Fermanagh/South Tyrone from Sinn Féin. Both nationalist parties could suffer a backlash from their grassroots base. But the possible dividends to be reaped by the SDLP and Sinn Féin, assuming everything goes according to plan, are enormous.

Not least the opportunity to keep pushing for a Border poll and “inevitable” Irish unity if unionism takes yet another debilitating hit.

It is, I think, no coincidence that the “Ireland’s Future” campaign has stepped up a gear: with a letter to Leo Varadkar, signed by a 1,000 people, demanding a Citizens’ Assembly “on a way forward”.

It is also no coincidence that the SDLP and Sinn Féin have finally concluded a pact which allows them to maximise nationalist votes and seats, while trying to suggest that nothing could be further from their minds.

It is no coincidence that an increasing number of unionists believe nationalism is putting great energy into an “England’s misfortune is Ireland’s opportunity” campaign.

All of which explains why this could be a very interesting election in Northern Ireland.