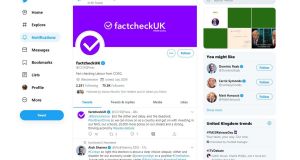 The Conservative party has been accused of misleading the public after rebranding one of its Twitter accounts.

For the duration of the televised debate between Jeremy Corbyn and Boris Johnson on Tuesday night, The Conservative Campaign Headquarters – the party’s press office – changed its Twitter name from CCHQ Press to factcheckUK, and updated the account’s description to read “Fact Checking Labour from CCHQ.”

The account, under the new branding, declared Mr Johnson “the clear winner of the debate” and tweeted a series of partisan claims about Labour, including: “Jeremy Corbyn won’t be honest with the British people about his Brexit policy. If he wins we will have months of dither and delay followed by two referendums – one on Brexit and one on Scotland. We should #GetBrexitDone in January and move on #BackBoris.”

The stunt was criticised by Twitter and was the subject of an immediate backlash across the social media platform. Sky’s political correspondent Lewis Goodall tweeted: “This isn’t funny or ‘banter’. It’s disingenuous and grim,” while the New Statesman’s political editor Stephen Bush told BBC Newsnight he believed the move was “corrosive to discourse and public standards of trust”.

Reacting to the move, the Labour Party tweeted: “The Conservatives’ laughable attempt to dupe those watching the #ITVDebate by renaming their twitter account shows you can’t trust a word they say.”

The Liberal Democrats said the manoeuvre was “straight out of Donald Trump or Putin’s playbook” and accused the Conservatives of “deliberately misleading the public”. The Lib Dems urged the Electoral Commission to intervene, but the watchdog said it did not have powers to do so.

Conservative party chairman James Cleverly defended its action on BBC Newsnight. “The reason we did that is because we were calling out the inaccuracies, the lies that were coming out during the debate. The NHS is not for sale.” Foreign secretary Dominic Raab also defended the stunt, saying the party “will make no apology for having an instant rebuttal of the nonsense and lies”.

Twitter said it could revoke an account’s so-called “verified” status if it appeared to be intentionally misleading people “by changing one’s display name or bio”. The social media platform has taken no direct action against the Conservatives, but said in a statement: “Any further attempts to mislead people by editing verified profile information – in a manner seen during the UK election debate – will result in decisive corrective action”.

Within minutes of the CCHQ Press account rebranding as factcheckUK, dozens of accounts rebranded themselves in a bid to mock the Conservatives’ move. Actor Ralf Little rebranded his account as “Conservative Party Press Orifice” before tweeting “we reckon that @jeremycorbyn was the clear winner” of the debate. Little’s account was promptly suspended.

This is not the first time the Conservative party has come under fire for its social media use in this election campaign. Two weeks ago CCHQ disseminated a doctored video of Labour’s Keir Starmer, the shadow Brexit secretary. The clip was edited to make it look as if Mr Starmer had responded with silence to a question posed by Piers Morgan of ITV.

Morgan said CCHQ had made it look like Mr Starmer had no answer to the question when, in fact, “he answered immediately”. The clip has been taken down by CCHQ Press.