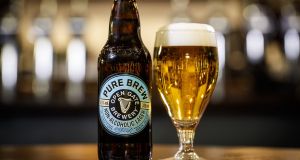 Pure Brew: Guinness promises all the flavour and none of the alcohol of regular lager.

Guinness has introduced its first non-alcoholic craft lager in Ireland as it looks to cash in on a growing consumer trend for cutting back or giving up on drinking altogether.

Pure Brew has been developed at Open Gate, Diageo’s experimental brewery at St James’s Gate in Dublin. The full-flavoured lager, which will be rolled out to 250 pubs in the capital this month, will be available nationwide from March.

Non-alcoholic beers typically start life as full-strength beers with the alcohol eventually removed through evaporation, a technique that often interferes with the flavour and character. Pure Brew however, which is the result of two years of experimentation, has been developed using a special yeast strain so that it is a fully-fermented beer. The result is a hoppy lager with fruity aromas and a hint of citrus flavour.

“Consumers shouldn’t have to compromise on flavour just because they want to moderate,” lead brewer John Casey told The Irish Times. “With Pure Brew we wanted to give people a taste experience comparable to regular beer.”

Mr Casey said all the development for the new lager was carried out at Open Gate. Other beers to make it to market from the experimental brewery include Hop House 13, which has been a huge success for Guinness.

The brand, which launched in February 2015, notched up sales of 25 million pints in its local market in 2016 with net sales up 31 per cent year on year.

Alcohol consumption levels in Ireland have fallen by 25 per cent since 2005, according to figures compiled by the Alcohol Beverage Foundation of Ireland. The trend is particularly noticeable among young people, where drinking levels have plummeted in recent years.

“It is difficult to put a figure on sales as we’re just starting off but we can definitely see more consumers choosing to moderate their consumption. That is obviously something happens a lot during Dry January but also increasingly at other times too and we want to give consumers a wider choice for those moments,” he said.

Mr Sandys said it had taken a long time to be able to scale production of the non-alcoholic lager but said the brewer was very happy with what it has arrived at.

“The greatest challenge for a brewer is to produce a great-tasting beer that doesn’t have any alcohol because most of the non-alcoholic beers on the market are a compromise in terms of taste because of the way they are made. We’ve gone about things differently and the result is a great-tasting lager that stands shoulder to shoulder with our other beers.

Mr Sandys did not rule out Guinness introducing other non-alcoholic or low-alcohol beers in the future.

“We see this as a consumer trend that is going to grow and grow, so we are focused on continuing to experiment at Open Gate,” he said.

This isn’t Diageo’s first foray into the world of non-alcoholic beers. Last year it introduced Guinness Zero in Indonesia, although the stout is not expected to be made available in Ireland.

It was also behind Kaliber, which launched in 1986.