You wouldn’t blame CEO for wanting to see back of 2017, but he views things differently 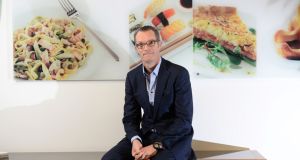 Patrick Coveney’s office in Santry, north Dublin overlooks a picturesque lake where a number of swans spend their days calmly gliding across the surface. Beneath the water, their legs are probably going like the clappers but that’s not visible from the shore.

It’s a metaphor that might be applied to Greencore chief executive, Patrick Coveney. In person, Coveney is calm and courteous, exuding a confident air that is helped by his considerable height and slim frame.

Yet his mind must be a whirl of thoughts and emotions – many of them negative – following a series of events in business and politics that have made 2017 a “difficult year” for the Cork-born executive.

In January, there was a rumpus over his pay, with 40 per cent of the votes cast against a resolution on executive remuneration at Greencore’s AGM. It was embarrassing for Coveney and his board.

In May, Greencore’s share price began to soften before taking a substantial hit in August, when concerns about the future of contracts with certain large customers (Starbucks and Tyson Foods) began to impact on sentiment.

In October, there was a listeria scare at a plant in Rhode Island. While small in scale, it generated a lot of negative press for the company.

On Tuesday, the company published its full-year results for the year to the end of September 2016. They showed a 74 per cent dip in pre-tax profits to £12.4 million, and no short-term bonuses for executives, including Coveney.

Amid all of this, Coveney chaired his brother Simon’s unsuccessful campaign for the Fine Gael leadership (and the honour of becoming Taoiseach) in the early summer.

You wouldn’t blame Coveney for wanting to see the back of 2017, although he prefers to view the year in slightly different terms.

“It’s been a difficult year,” he says, while sitting in a leather chair in his snug office. “We have made some huge changes that I think in time will be seen to be hugely positive for Greencore. But we’ve also had some pretty significant challenges and disappointments as well.”

Coveney expresses his disappointment at not being on the “front foot” in publishing its full-year results. Yet, he remains confident that the benefits of its potentially transformational $747 million (€695 million) purchase of Peacock Foods in the United States in late 2016, coupled with a scaling up of its UK sandwich and ready meals business, will bear fruit in a major way for Greencore in fiscal 2018.

“The business we bought in America is very good and is trading well and it gives us, not just a future platform, but a business right now that is very strong and growing.

“We’ve also done a ton of work to scale up our business in the UK and have taken our market share in sandwiches to more than 60 per cent in a growing market...it was 17 or 18 per cent when I took over this role [in 2008].

“We’re now the only supplier of sandwiches to M&S, Asda, Sainsbury’s, Morrison, Co-op and a big supplier to Waitrose, Boots, Aldi and Lidl as well. So it’s a significant business, and a big portion of that stepped up this year.

“The economics of the business have stepped forward as well. We’ve increased the [operating] profitability by almost 40 per cent. The momentum of the business in terms of what that means for FY ’18 should be very positive us as well.

“Our business in America is better set up to be successful now than at any point before. But we have to demonstrate that by delivering performance in line with what we expect it to be.”

On the flip side, Coveney accepts that Greencore’s own business in the US (pre the Peacock deal) didn’t perform to expectations last year.

Unfortunately for Coveney and Greencore shareholders, the momentum in its share price has been downward – with the stock off 13.5 per cent over the past year.

Coveney notes the positives from the results. For example, its net debt to Ebitda ratio remained static at 2.4 times, which is no mean feat given the financial re-engineering of the business over the past year or so.

There’s also a line in its statement that it recently extended a “long-term, strategic partnership” with one of our largest customers. The customer isn’t named but it’s thought to be Tyson Foods, which has extended its deal out by three years to 2026. Tyson is Greencore’s biggest single customer.

He accepts that its full-year results are “noisier” this year as a result of “more investment, restructuring and exceptional costs” and that “people will be irritated by the level of exceptional costs that we have, that’s a source of frustration”.

“I am disappointed with where our share price is and with the level of uncertainty and noise around aspects of our strategy and our business model, aspects of the cash generation of the business. We are not where I’d like us to be in terms of our returns to shareholders this year and we need to do something about that.”

Coveney accepts that the communication of some of the issues facing the business this year could have been better managed, but adds that customer confidentiality ties the company’s hands to some degree.

“What we underestimated this year was the sheer level of change that we were making in the business and people’s needs to understand the various moving parts.”

A side effect of Greencore’s issues was no cash bonuses for senior executives. This played a part in reducing Coveney’s total remuneration to £1.4 million from £2.4 million in the previous year. “I’m not asking anyone to cry for me on this basis. We’ve had years where we’ve performed very well and we’ve paid out decent bonuses but this year hasn’t been that.

“I’m very well paid in Greencore but it’s supposed to be [partly] variable pay, pay for performance and if you don’t perform as well as the board want at the start of the year [\you don’t get the bonus].”

On Brexit, Coveney says the impact on the company to date has been “modest”, largely centring around consumer confidence and food price inflation driven by the double digit fall in the value of sterling over the past 18 months.

Of greater concern is the potential impact on the labour market if immigration controls are tightened and the flow of EU nationals to the UK dries up.

About one-third of Greencore’s 12,000-strong workforce in Britain are nationals of other EU countries.

“We have people from every one of the 27, including Irish,” he says. “Poland is the biggest nationality after British that we have in the UK.”

Given the low skilled nature of many of its roles, can’t future vacancies be filled by unemployed British people? “There isn’t any,” he shoots back. “Britain is close to full employment. You go to Lincolnshire, a big salad growing area in the UK … and the workforce there is largely immigrant. There isn’t anybody else.

“The structure and economics of the UK food industry requires a combination of a workforce that comes from Europe and the skills that come with those workers.

“There aren’t a large number of butchers, chefs, and food scientists in the UK who are unemployed. It’s proving harder for us to staff all of our sites.”

He’s also concerned that if hefty tariffs are introduced following the UK’s exit from the EU, the infrastructure won’t be in place to deal with the issues this will throw up. This could be a particular problem as Britain is not self sufficient in many areas of food production.

“It won’t matter if there’s a 15 per cent tariff on lettuce coming from southern Spain if it ends up sitting in Calais for three weeks going off. At the moment, there’s nothing like the systems infrastructure, port infrastructure and staff to administer a separate customs regime to enable Britain to sit in a global food industry outside the EU single market. That will take a very long time to sort out.

“That’s obviously a big source of concern for a country like Britain, which doesn’t have anything like enough to feed itself.”

Greencore’s business is now largely focused on the UK and the US and it is solely listed on the London stock exchange but there remains a strong Irish flavour to the company.

Greencore buys about €150 million worth of ingredients from Irish farmers each year. It employs 40 staff in its headquarters in Dublin, where the senior executives are based, and generates around €50 million in revenues per year from Ireland through two ingredients businesses here.

And it has substantial landbanks (120-plus in each case) from the old Irish Sugar plants near the towns of Carlow and Mallow, Co Cork, that are worth more now in a recovering economy than a decade ago.

“[In Carlow] we’re engaged with State agencies on the potential use of the land. We’re not currently envisaging the land being used for housing. The site is more likely to be used for commercial or recreational uses of some kind. This isn’t going to be transformational for Greencore shareholders. The book value of this land is €6 million or €7 million and over time I think we’ll get that.”

After a decade in the job, does Coveney still have the same appetite as before for the CEO role at Greencore?

“I’m 47 and a lot of people don’t become CEO until around now in their careers. I love the job, I love the business. I could see myself being here for another decade.

“What matters is, do I want to still get up and do the job every day? Right now, with the challenges we’ve had in 2017, I feel a positive motivation to demonstrate the quality of the business and to get real value from the investments and strategy that we’re pursuing.”

We close with a chat about Coveney’s leadership style, which very much revolves around resilience. “In order to build confidence around you...you have to make it look like it’s natural and easy,” he says. “That’s very reassuring to people. But resilience and sticking at it matters as well because it’s not always as easy as it looks.

“What we have gone through this year and what we now need to do at Greencore is an example of that. It looked to some people that Peacock was a great idea and we’ll just continue to rocket off but aspects of 2017 have been tough for us.

“There are question marks around [the integration of] Peacock, around some of our customer relationships, we haven’t performed as well, the level of restructuring and exceptional costs is going to irritate people. Resilience is one of the elements of my style that is less visible to people.”

The swans outside understand.

Something that might surprise: “The longer I’ve been in this job the more time I’ve spent cooking. Increasingly, I’m shopping and cooking for my family. It’s important for me to have a sense of how consumers view our products on the shelf.”