Organisation understood to be to acquiring 200-acre site in Plumperstown 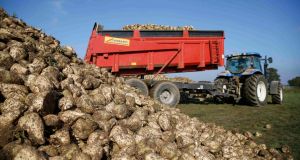 At the time of the EU reforms, there were 285,000 sugar beet growers in the bloc, this has subsequently been reduced to less than 160,000. Photograph: Pascal Rossignol/Reuters

Beet Ireland, the lobby group seeking to resurrect Ireland’s sugar industry, is in the process of buying a site on the Carlow-Kildare border for a new national sugar processing plant.

The organisation is understood to be finalising a deal to acquire a 200-acre site in Plumperstown, formerly owned by a concrete manufacturer, for around €4 million.

In conjunction with a strategic partner, Beet Ireland plans to redevelop the site into a high-tech sugar processing facility, which could produce up to 200,000 tonnes of sugar a year.

A spokesman for Beet Ireland declined to confirm details of the transaction, saying they were still being finalised.

Battered by a slump in global grain prices, tillage farmers here are said to be keen to resume growing sugar, which is traditionally grown in rotation with other crops but is considerably more profitable.

The viability of resurrecting Ireland’s sugar industry has been boosted by the recent abolition of EU sugar quotas.

Greencore, an offshoot of the former Irish Sugar Company, closed its last Irish sugar plant in Mallow in 2006, effectively ending production in Ireland.

As the holder of the entire Irish sugar quota, the company availed of an EU voluntary restructuring scheme to dismantle its facilities and cease production.

The State secured €353 million from the scheme, of which €220 million went to beet growers, €127 million to Greencore, and €6 million to machinery contractors.

At the time of the EU reforms, there were 285,000 sugar beet growers in the bloc, this has subsequently been reduced to less than 160,000.

Michael Hoey, chairman of Beet Ireland, told The Irish Times the group had a viable business plan ready to go and that it favoured developing a collaborative model with farmers analogous to the dairy industry.

“It’s vitally important that young farmers get behind this initiative. If people want it bad enough it will happen,” he said, noting Irish consumers wanted to buy Irish sugar.

He also noted that sugar beet was a carbon sink and the large-scale planting of beet would help the State reduce harmful emissions.

Mr Hoey, who addressed a meeting of the Irish Grain Growers in Bunclody, Co Wexford on Wednesday night, said the feedback from farmers had been extremely positive.

Carlow-Kilkenny Fine Gael TD Pat Deering, who chairs the Oireachtas agriculture committee, said there needed to be a study completed to ensure that the figures would stack up for re-establishing the industry.

Nonetheless, he said the abolition of sugar quotas opened the door for sugar production once again in Ireland once a suitable processing site can be found.

“The return of the sugar industry would create hundreds of direct jobs, it would also lead to significant bio-ethanol production and would allow for the production of feed products from the by-products of the beet,” he said.

Mr Deering mooted the idea that Government might support the initiative through the provision of a grant to develop the proposed plant.