Genovese Foods’s pesto plan has all the right ingredients 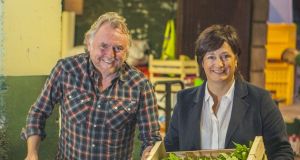 It’s 7.15am and Gill Toal is standing in Dublin’s fruit and vegetable market eyeing up the produce. With no time to linger, she picks out fresh basil and the other ingredients she needs and by 8am she is at Genovese Foods’s unit in Stoneybatter where the day’s production is about to begin.

Genovese Foods was established in 1999. Toal says it is the oldest producer of fresh pesto in Ireland. Not that she’s been there that long. She and fellow foodie, Enda McCormack, bought the business almost two years ago from its founders with the backing of Abbey International Finance.

McCormack and Toal have 50 years’ experience in food and catering between them and intend transforming what was essentially a long established but small lifestyle food business into a future-focused commercial enterprise with serious growth ambitions.

“We’re a very Irish company with a very Italian name and are all about producing in small batches, using quality fresh ingredients and allowing flavours to develop naturally and unhurried,” Toal says. “We respect the provenance of our raw materials and are Origin Green verified which means we live by a code that reflects those beliefs in both economic and social sustainability.

“Our main target audience is the 22-35 age group, millennials who are well educated, working, leading a healthy lifestyle and are socially responsible as well as 55+ Baby Boomers with good disposable income.”

Genovese Food has always aimed upmarket and prides itself on being GMO and preservative-free, low salt, and vegan/vegetarian. However, when McCormack and Toal took over, it only had one product and that had been packaged in the same way for years.

“The labelling was basic and created little brand awareness,” Toal says. “We have since re-branded while retaining the essence of the traditional packaging and changed the name of the original product to Pesto Verde. We’ve also launched two new flavours, Pesto Rosso and Tapenade Rustico, and developed a marketing strategy which didn’t exist before.”

In January 2016, the company had limited distribution, mainly in the greater Dublin area. Now it’s in 16 Tesco stores with 14 more due to come on stream countrywide.

It’s a similar story with SuperValu. Initially, Genovese pesto was only available in what had been Superquinn stores. Now it’s listed in 21 SuperValus in 11 counties. The company has also recently completed Lidl’s first Kickstart programme, which is aimed at preparing a group of Irish artisan producers for launch in 153 stores.

In August last year, the company diversified into food service and won its first contract in the sector while, this year, it will launch a range of fresh mayonnaises made with all-Irish ingredients.

Turnover has jumped 40 per cent in 22 months, but it has not been plain sailing.

“Just because you get a listing doesn’t mean sales follow,” Toal says. “One of the hardest things is pulling out of a store if sales don’t meet expectations. It’s partly down to people telling you what you want to hear at a tasting but not following through with a purchase. And in places where meat and two veg are still the norm, people won’t even taste it. We also discovered people weren’t buying because they didn’t know how to use pesto. That led us to start producing recipe cards for tastings.”

Distribution is a perennial problem for small producers as they can’t afford the margins distributors charge. This leaves them with little option but to self-distribute.

“We’re caught in a price window above which we can’t go,” Toal says. “If I could charge more for the product, we could afford a distributor but we can’t. We make in small batches, which is an expensive methodology, as is using quality ingredients. It’s disheartening that our products, which won Blas na hEireann awards in 2016 and 2017, sell at the same price as pestos made with cheaper ingredients.”

Also making life tough for Genovese is the continual stream of start-up food businesses it has to contend with. Toal is not a fan of this constant churn of newcomers.

“It makes it very difficult to build brand loyalty in what is a tiny market,” she says. “A lot of the products are ‘me too’, not innovative, and what they don’t seem to realise is that it costs a great deal of money to scale up. Eventually they discover this, fall by the wayside and the funding is wasted. Surely it makes more sense to help established companies grow and expand into new markets?”

At present, Genovese Foods, which employs six people, is only using about 40 per cent of its production capacity. Toal says that, despite Brexit, the company is looking to the UK for growth.

“We’ve never been there so it’s not as scary for us as it is for those who have been used to doing business there for a long time. We will be going into this with our eyes open. We’re also looking at Dubai and the Nordic countries,” she says. “We don’t underestimate the challenges that lie ahead, but we are firmly focused on two goals: being the ‘reach for every time’ brand in Ireland and becoming a recognisable, sustainable Irish gourmet brand in Europe, despite our Italian name.”