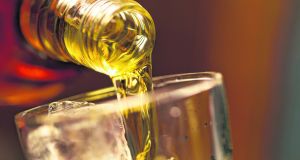 Sales of Irish whiskey have soared in recent years.

The Irish Whiskey Association (IWA) has lodged several complaints with the Food Safety Authority of Ireland (FSAI) about what it claims is the mislabelling of whiskey products, a trend it says is damaging the reputation of the industry here.

When contacted, the company said it made no secret of the fact that it bought “new-make whiskey” from other distilleries and then aged the product in oak barrels by the sea.

“Our view is that the character and personality of a whiskey comes from the barrels it’s been matured in and the location where that ageing takes place,” the company’s general manager Cyril Walsh said.

The FSAI said it was aware of the issue but was precluded by law from commenting due to the regulations on official controls.

However, a spokesman for the IWA, the Ibec group that represents the industry, said there was no place in the industry for misleading labelling and marketing, particularly where it refers to a non-existent distillery.

“We are aware of Irish whiskey brands on the market, both in Ireland and internationally, which prominently refer to a named ‘distillery’, where same is neither licensed or operational as an Irish whiskey distillery,” he said.

“Premium Irish whiskeys are proving increasingly attractive among discerning consumers around the globe and this in turn is delivering significant value-add for the Irish whiskey industry,” the spokesman said.

“However, the greater trend toward premium Irish whiskeys is intrinsically linked to increased consumer demands for authenticity. Consumers are willing to pay a premium price to know where the product is made, by who and how,” he said.

Sales of Irish whiskey have soared in recent years. In the US they hit the $1 billion (€900 million) mark for the first time last year, which to nearly 4.7 million nine-litre cases. At the same time there has been a proliferation of so-called boutique whiskey brands amid an uptick in demand for premium products.

The IWA, which represents 40 companies in the Republic, said where guidelines on the labelling and marketing of Irish whiskey are not adhered to, “we require our members to amend such materials to avoid misleading the consumer”.

“In many cases companies have voluntarily changed labels in recent years to ensure transparency for consumers,” it said.

Earlier this year, the FSAI published guidelines on the labelling and marketing of Irish whiskey, which the IWA helped draft.

These guidelines stipulate that all distilleries involved in the production of Irish whiskey must be verified by Revenue. They also state that any statements on labels that would appear to give the impression of distilling where distilling is not yet taking place is not permitted.