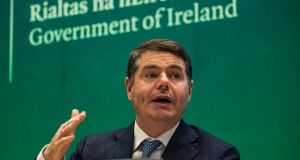 Minister for Finance Paschal Donohue: has pointed out monthly spending returns for the year to July show health is continuing to exceed its budgeted allocation for 2019. Photograph: James Forde

Correspondence seen by The Irish Times reveals that an ultimatum was delivered by Paschal Donohoe’s department before the summer.

And sources say there has been a number of very difficult exchanges between his officials and Simon Harris’s department as the latter continues to exceed its budgets, though by a smaller margin than last year.

Senior health sources played down the differences with the spending watchdogs, but sources on Merrion Street said attempts to control health spending were proving extremely challenging and were straining relationships between senior figures.

Official minutes of the cross-Government oversight group on health spending show increasing concern in the Department of Public Expenditure over recent months at the rising Health Service Executive financial overrun which had reached nearly €170 million by the end of May.

Official correspondence reveals that, at the end of May, the Department of Public Expenditure (DPER) indicated it would not consider any new health policy initiatives until the overrun was tackled.

“DPER reiterated that given the risk to 2019 and the challenges to 2020 that there can be no engagement on any policy that has financial implications for 2019/2020 until real and meaningful progress [is made] at addressing the underlying issues”, the minutes of the meeting on May 27th states.

Asked this week whether it was still its position that it would not look at new health initiatives until the overrun was tackled, the Department of Public Expenditure said: “Managing the delivery of public services within budgetary allocations is a key responsibility of every department and Minister. This department is in regular contact with all other departments and offices to ensure that expenditure is being managed within the overall fiscal parameters.

“This, and the funding of policy priorities for the forthcoming year, will be considered as part of the Budget 2020 estimates process, reflecting the most up-to-date expenditure position at the time.”

Sources with an insight into the thinking of the Department of Health are adamant, however, that saving measures, particularly employment restrictions put in place by the HSE since February will bear fruit and that the HSE overrun for the year will be significantly less than the €600 million recorded in 2018.

The Department of Public Expenditure has had particular concerns regarding the number of staff being taken on in the health service.

Minutes of the meetings maintain that by the end of May the HSE had exceeded the number of additional staff it was to take on for the whole of 2019.

Minutes also maintain that the HSE “admit that some recruitment did occur which was not authorised and there have been breaches”.

Speaking on Tuesday, Mr Donohoe acknowledged that concerns remained about the level of overspending in the Department of Health, pointing out that monthly spending returns for the year to July showed that health was continuing to exceed its budgeted allocation for the year.

The Minister for Finance and Public Expenditure and Reform said he would review the August spending returns and use that “as a basis for the engagement that I’ll be having” with the Department of Health and other departments on their budgets for next year over the coming weeks.

Mr Donohoe said “a very significant amount of work is under way” in both the HSE and the Department of Health to bring overspending under control and avoid the huge overruns of last year.

“What happened last year . . . cannot be repeated,” he said.