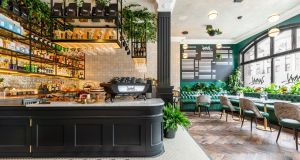 Iconic Offices, the State’s largest flexible workspace provider, has invested more than €500,000 in building a cafe and restaurant at one of its Dublin facilities, marking a departure from its previous strategy of simply offering workspace.

The company, which has a portfolio of 16 office locations, opened Vandal Cafe and Restaurant at the Masonry, its 70,000sq ft development in Dublin’s Liberties.

Iconic has redeveloped a former grain store to create the restaurant which includes a heated outdoor area. The facility was designed in collaboration with Odos Architects.

“We’re just trying to raise the bar,” said Joe McGinley, the company’s chief executive, of the move into hospitality. Prior to the move to create its own restaurant, Iconic had partnered with other operators. For example, the company is working alongside Press Up Entertainment in the Lennox building where Press Up operates Doolally, a new Indian restaurant.

Vandal Cafe and Restaurant currently offers breakfast, lunch and brunch, although the company will look at offering evening meals when the facility is longer established. The facility will also double up as an event space which can hold up to 150 people.

“It has been the most significant investment the company has made in terms of capital injection into a building redevelopment to date,” an Iconic spokeswoman said of its investment in the Masonry.

Iconic Offices was established by Mr McGinley in 2013 after he spotted a gap in the market while running his previous company Bespoke Estate Agents. The company is on track to record revenues of about €19 million this year.

Its latest building, the Masonry, has the capacity for 900 workers over five floors of offices. The building connects Georgian-style office space to a former warehouse in what was previously the headquarters of IAWS, now a part of Cuisine de France owner, Aryzta.

Mr McGinley said he sees Dublin 8 becoming increasingly attractive for office space as tenants seek to get “more bang for their buck”. And while the addition of a directly controlled restaurant is a new move for the company, the “plan isn’t to scale as a restaurant chain”, Mr McGinley added.

Iconic typically operates buildings on a 25-year lease and invests in renovating the space to offer co-working spaces as well as more permanent offices for companies.