New distillery and visitor centre to open on Ring of Kerry 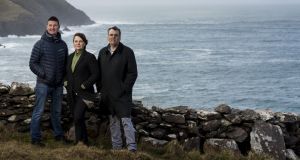 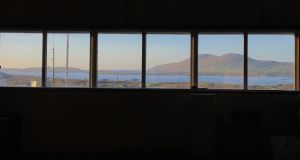 The view from the proposed visitor centre. Photograph: George Boyle

A new €10 million micro-distillery located in a former sock manufacturing plant along the Ring of Kerry is to open shortly.

The backers behind Skellig six18 in Cahersiveen, which include the head of Davy’s private client division, Patrick Cooney, intend to produce both craft gin and pot still whiskey at the distillery, which it is hoped will become a major tourist attraction.

The distillery is the brainchild of June O’Connell, a former partner at legal firm William Fry, who comes from the town. Mr Cooney, her husband, is a non-executive director, while Patrick Sugure, formerly chief finance officer at Wilson Socks, is its CFO.

The Wilson Socks factory, which once employed 240 people and produced more than 80,000 socks a week, closed in 2003 and has remained empty for many years.

The 2,400sq m (25,833sq ft) distillery, which looks out on to the Atlantic and across to Valentia Island, already has a 500 litre bespoke gin still from Italy in situ that is due to be commissioned in the next fortnight. Its first product will be a gin that uses local botanicals and is the result of a collaboration with Ross Lewis and Darren Hogarty of Michelin-starred restaurant Chapter One.

A gin school, an interim visitor centre and a bottling plant are to open at the site before the end of the year. The parent, Skellig Distillers, also plans to have a two-tonne whiskey distillery operational by the end of next year with its own stock available from Christmas 2024.

“The whiskey distillery will have capacity for six casks per day on a single shift and the new facility has planning permission to run a three-cycle shift although it will be some time before we move up to that level,” Ms O’Connell told The Irish Times.

“The initial plan is to produce about 33,000 cases a year and we’ll be maturing it here as well, although we won’t be bottling and selling everything that matures after three years,” she said.

Skellig six18, the name of which is inspired by the number of steps to the top of Skellig Michael, will in its final phase also include a new permanent visitor centre and VIP lounge overlooking the Fertha river estuary as it flows into Valentia Harbour. The lounge will host a viewing deck and rudimentary observatory that lets visitors look out on to the Kerry Dark-Sky Reserve, a protected place of natural darkness that aims to exclude light pollution.

The project has been designed by architect George Boyle, whose other work includes the Teeling whiskey distillery in Dublin.

The distillery founders have already ploughed €1.25 million of their own money into Skellig six18 and are now looking to raise a further €3 million under the Employment & Investment Incentive Scheme for the whiskey plant, which is expected to be ordered early in 2020 and in situ by the end of that year.

“There are eight five-star hotels on the Ring of Kerry and over 1 million people will be passing our door. We expect to have 100,000 visitors in five years’ time,” said Ms O’Connell.

The distillery currently employs six people with headcount expected to rise to up to 30 once fully operational.