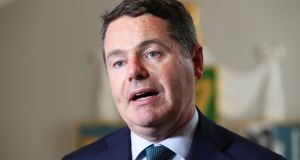 Minister for Finance Paschal Donohoe: In Budget 2020, at best he will be just adjusting for inflation. At worst, he’ll actually be increasing your tax burden. Photograph: Jonathan Brady/PA

With such a constrained purse to play with in Budget 2020 – not to mention the dark shadow of a no-deal Brexit on the horizon – the likelihood of a cut to our personal tax burden this October would appear slim at best.

Indeed on Tuesday we published figures from Revenue which show just how much decreasing tax rates or widening tax bands would cost. Shifting the earnings level at which people start paying the higher rate of tax up by €1,500 to €36,800 would cost €320 million, while inching it up by €1,000 would cost €216 million.

With little more than €200 million for Minister for Finance Paschal Donohoe to expend on tax cuts, this hardly look affordable. Even an increase of €1,500 still wouldn’t get us close to the level at which you start paying the higher rate in other countries, such as the UK (40 per cent) at €51,000, or Germany (42 per cent) on €54,950.

And yet, each year (bar those austerity ones of course) the Government manages to pull a rabbit out of the hat and deliver a “tax cut” to the electorate.

Before you get too excited about how you’ll spend the extra €200 or so that might come your way next January, it is worthwhile to consider just how “real” these much-touted tax cuts really are.

After years of stagnation, earnings are once more on the rise here. An interesting table in the aforementioned Revenue report shines a light on how wage increases are being enjoyed right across the board.

With earnings growing again, tax bands and credits should be inflation-adjusted to ensure that the purchasing power of people’s earnings aren’t diminished. For example, someone earning €35,300 this year would bring home €2,435 a month. But, if they get a €1,000 pay rise next year, and the tax bands aren’t adjusted, their takehome pay will rise by just €43 a month, by virtue of suddenly being hit with the higher tax rate of 40 per cent on all their pay increase.

So that near 3 per cent pay increase, which might be just keeping our worker in line with wage inflation, is suddenly a lot less attractive.

The problem with our system is that tax bands and credits are not automatically indexed to inflation. Instead, the Government decides to do so on a discretionary basis each year.

This affects us all, as over time, non-indexation seriously erodes what you get to bring home, and significantly increases how much the exchequer gets to keep, without many of us even realising what’s going on.

If it does decide to index tax bands and credits, the Government then manages to sell this adjustment as a “tax cut” to the electorate, rather than as an arbitrary exercise to ensure that workers aren’t unduly hit by inflation.

Known as bracket creep, this happens when earnings rise but tax bands don’t move at the same pace, pushing taxpayers into higher brackets without an equivalent real improvement in their takehome pay.

In the five years to March 2019, for example, earnings rose by 10 per cent, with this growth fastest in the information and communications sector (+21.2 per cent).

And tax bands are an area the Government has actually been proactive in, with the income level at which you start paying the higher rate of tax increasing by 2 per cent last year.

Consider also the PAYE tax credit. Currently €1,650, this personal tax credit means that you won’t pay any tax on this level of earnings. But, if you want an example of tax by stealth you need to look no further.

If the Government does announce a lightening in your tax burden on October 8th, that any 'real' gains are likely to be minimal

This credit hasn’t been changed since 2011 (when Fine Gael came to power), which means that all of the earnings growth since then has been completely discounted. And not only that, but the current level is actually 10 per cent lower than it was back in 2009/2010, when it reached a peak of €1,830.

Even if the Government did decide to index it come October’s budget, think of all the gains it’s made in the interim.

And it’s not just direct taxation where stealth can pinch. The income limits for the medical card haven’t been changed since 2006. This led to a significant drop-off in coverage rates from 40 per cent in 2012 to 34 per cent in 2017, on the back of recovering earnings.

The Government might argue that indexing has an obvious cost. Earlier this summer, the Economic and Social Research Institute said it would cost about €1.2 billion to inflation-proof tax – and welfare changes – in this year’s budget, with about €460 million of this needed to index tax rates.

Nonetheless, indexing of some form is likely to feature in this October’s budget. Just remember that if the Government does announce a lightening in your tax burden on October 8th, that any “real” gains are likely to be minimal. At best, Paschal Donohoe will be just adjusting for inflation, at worst he’ll actually be increasing your tax burden.

A real tax cut would need him to not only adjust the current tax system for inflation – but to then offer a further cut on top of this.