Minister for Finance understood to have a budget-day package of about €2.8bn 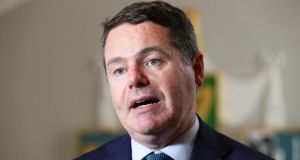 More than 100,000 taxpayers will pay more income tax from January next year unless the Minister for Finance makes some adjustment to account for inflation on budget day.

However, according to newly published estimates from Revenue, there would appear to be little scope for making adjustments to tax bands and rates in this year’s budget given the amount of money available for tax cuts and the cost of achieving these cuts.

Minister for Finance Paschal Donohoe is understood to have a budget-day package of about €2.8 billion, but with €2.1 billion already allocated for items including public pay rises, infrastructure and the National Broadband plan, it leaves just €700 million available for new spending/tax cuts. And, with a ratio of 2:1 in favour of increased spending, it leaves just €233 million available for tax reductions.

If Mr Donohoe was to apply cuts in the rates of tax levied, Revenue estimates show that the cost of reducing the standard rate of tax by 1 per cent to 19 per cent is €693 million, or the top rate by 1 per cent to 39 per cent would be €362 million a year. Similarly, cutting the 4.5 per cent rate of universal social charge (USC), which some 1.2 million taxpayers are due to be subject to in 2020, to 3.5 per cent would cost €422 million on a full-year basis.

However, according to a new pre-budget report from Revenue, which sets out the cost to the Exchequer of various changes to Ireland’s personal tax regime, the money simply isn’t there to achieve any meaningful decreases in personal taxation.

On the back of rising incomes, Revenue estimates that more than 28,000 earners will start paying income tax, at the standard rate of 20 per cent, for the first time in January 2020, unless Mr Donohoe widens the bands on October 8th.

Similarly, a further 26,800 taxpayers would be pushed into the 40 per cent tax bracket next year, unless bands are similarly widened. This would result in an increase in the proportion of taxpayers paying tax at the higher rate, up from 21 per cent in 2019 to 22 per cent in 2020.

On the USC, Revenue estimates suggest that 18,700 people would pay the top rate of 8 per cent next year, while 39,300 would be pushed from the 2 per cent rate to the 4.5 per cent rate. In addition, some 1,100 taxpayers will start paying USC for the first time.

The figures also show a slight increase in the number of income earners who can expect to pay no income tax in 2020, up by 1,800 to 943,500. However, unless tax bands are indexed for next year, the number of taxpayers who are exempt from either USC and income tax will fall, marking a reverse of a trend that has seen the number of exempt taxpayers increase from year to year.