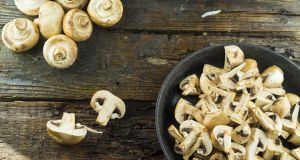 A specialist hi-tech mushroom growing and packing facility established in Armagh by two brothers, who had worked in their family’s business for decades, has been placed in administration.

The brothers had invested £1.5 million to develop the state of the art facility which promised full traceabillity from the straw bale to the shop shelf.

The business had quickly become a firm favourite of many food producers in the North.

But on Wednesday Stephen Cave from PwC confirmed his appointment as joint administrator of Button Farm Mushrooms.

PwC said the business had “faced difficult trading conditions including increased raw material costs and the loss of a key customer which had resulted in severe cash flow problems”.

At one stage Button Farm Mushrooms had imported its compost from Belgium based Coenegrachts Substraat.

PwC’s Stephen Cave said: “The business has faced a number of adverse factors, which have impacted significantly on its ability to trade profitably and these ultimately led to the directors’ making the difficult decision to appoint administrators.

“Our priority is to work with the directors in assessing the immediate financial and trading position of the business and to communicate with the workforce, key customers and suppliers.”