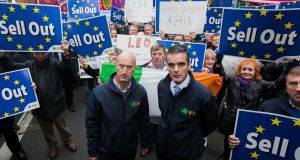 An EU Food and Veterinary Office (FVO) report on the “weak flesh” meat scandal in Brazil has confirmed the European Commission was “misled”, according to Irish Farmers Association (IFA).

IFA president Joe Healy said the EU report undermines any credibility to arguments being made in the Mercosur trade negotiations that Brazil will meet EU production standards on beef, pork and poultry imports. He said the findings back up previous IFA calls for a ban on Brazil meat imports in light of practices that emerged from a police investigation known as “Operation Weak Flesh”.

Brazilian meat exports plunged earlier this year after federal authorities announced in March they were investigating evidence that companies, including two of Brazil’s largest meat producers, bribed government officials to approve the sale and export of contaminated meat.

The FVO report concludes “the Brazilian Competent Authority is not in a position to guarantee that the relevant export requirements are met”.

In addition, it states, “competent authorities are signing export reports certificates despite being unable to ascertain the veracity of certain statements therein.”

IFA national livestock chairman Angus Woods said the report highlights that commitments and guarantees given by the authorities in Brazil were considered “not reliable” by the FVO.

The “competent authority has not ensured that appropriate official staff resources are available at establishments approved for EU exports and therefore cannot guarantee that products exported to the EU have been produced in accordance with EU requirements”, it adds.

The report also highlights that “evidence gathered during the audit demonstrates that the system does not offer sufficient guarantees” concerning avoiding conflict of interest of officials performing controls.

On factories or establishments listed for export to the EU, Mr Woods said the report states, “the system does not guarantee that the list of establishments approved for EU export and communicated to the commission is accurate and kept up to date”.

The EU audit team found that a veterinarian employed and paid by the company formed part of the federal inspection service team on a permanent basis. No procedures were followed to avoid any potential problems of conflict of interest, it said. The report highlights that the slaughterhouse involved was one of the biggest exporters worldwide of meat to the EU in 2016.

On the lack of traceability and the separation of EU and non-EU eligible animals and products, the EU audit report states the segregation of the production of raw material to be used for the production of EU-eligible meat products was not ensured. The EU eligibility of the meat and mechanically separated meat used was not always verified. The exclusion of ineligible types of meat (kidneys and trimming of the sticking point) was not ensured. Mistakes on EU eligibility in the national sanitary certificates were made.

Earlier this week the IFA held a protest outside the EU Commission’s offices in Dublin over its proposal to offer Brazil and other South American countries further access to the EU market for beef and poultry under the Mercosur negotiations.