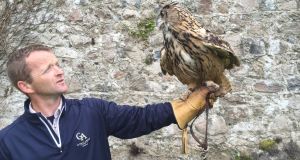 Jürgen Hick: “It’s not about killing as many pests as possible because, unless you manage the source problem, more will come”

Jürgen Hick received his first falcon, a kestrel, from a nest (under licence) when he was 15.

He has never lost his fascination with birds of prey and has been working with raptors for 26 years. He is based in Co Clare and offers a pest control service and falconry tourism.

He has been working in the area of natural pest control for almost 15 years.

We meet at Glenlo Abbey Hotel in Galway, where Hick offers a comprehensive falconry experience for visitors.

“We hope to bring some new life to the walled garden at Glenlo by building a sheltered area for both falconry and archery,” he says.

Bill Clinton has been among those to enjoy the Hawk Walking and Bird of Prey Experiences at one of the five-star hotels Hick works with.

“Tourism work has to be done to the highest standard,” he says. “It requires an experienced handler who is able to read and understand the birds. The birds have to be exposed to humans as much as possible from a young age. This serves them well in the future to become relaxed and minimises stress.”

Hick considers the number of inexperienced people coming into the sector as one of the negative sides to the upturn in raptor tourism.

Experienced handlers rarely, if ever, buy trained birds as you never know what you are getting until it’s too late. Hick has 13 birds, including some owls, which are used for educational purposes and the rest for pest control. His raptors are his business. The average lifespan of a working hawk is 35 years, and 15-20 years for a falcon.

“Using birds of prey to clean up farmland, stables and factory land is the type of work the birds themselves love to do. We try to find a raptor best suited to chasing the pest species at hand. The pest also has to recognise the raptor for what it is: potential danger.”

On an ecological and environmental basis, Hick is adamant that the use of raptors in pest control is essential for saving our countryside.

“There is a huge pest control issue in Ireland being blindsided and it is up to us to control it at source. It’s all about food. Control the food source and we can then push the pests back to natural foraging, using the raptors as a deterrent. It’s not about killing as many pests as possible because, unless you manage the source problem, more will come.”

Hick warns that much of the gadgetry found on the internet to solve the issues of rodents and pests is expensive and does nothing to sort the issue. He recommends keeping it simple. Pests understand predators and don’t want to be dinner, so they move on.

On average Hick takes two falcons and one hawk for pest control in an enclosed area – such as moving on starlings, pigeons, rabbits and so on. He uses falcons for the removal of crows and gulls.

Each location and infestation issue is very different, so he takes a few hours to watch exactly what is happening first. A starling issue usually takes three to four days to rectify. Crows and gull issues can be harder to move, especially if there are generations of pests there.

“We’ve worked at landfill sites throughout the country, using the falcons to keep the crows and seagulls out,” Hick says.

He has provided services at some of the finest and biggest horse-breeding facilities in the State in an effort to manage cross-contamination issues that arise from starlings spoiling feed with waste material and making animals sick.

“We have worked at golf courses, food processing companies and many farms, trying to help educate people to the risks around contamination issues.”

Hick thinks that not enough business people know enough about natural pest control and that the use of bait boxes in the hotel and food industries is corrupting the food chain. For example the owl population is suffering, with young or hungry owls eating the poisoned rodents.

“It’s difficult for us to come in to an area that uses bait boxes, as using our birds puts them at risk of secondary poisoning. More understanding of control measures by managements is required for successful results.”

County councils could consider tackling the growing problem of gulls and crows by employing Falconry Pest Control along with other bin/food management programs, Hick says.

“We have to take responsibility for our actions, and letting these animals feed from our waste while contaminating other food sources must stop. Let us not forget these pests have wings and can quickly spread disease with very little control over where they go. Watching young crows and gulls steal chips from kids and waste from bins is becoming a common sight.”

Create an unpleasant environment for the pest and they will move on: provide lots of food and the area becomes overrun with crows and gulls.

Hick’s brother in-law, Gerhard Booysen, has been a driving force behind the scenes as a pest controller and falconer, while his eldest son, Coley, is working his way through his falconry apprenticeship.

Hick has found it difficult to employ truly passionate people who will work naturally with the birds, making it hard to expand the business.

In five years’ time he would like to see himself running his own centre for birds of prey centre, something a little different from the rest, where people can relax and watch the birds fly as they are meant to. He would also like to build up a large natural pest control team that can tackle most problems and help people to understand the pest-prey relationship a bit better so that we will have a more sustainable approach to the problem.