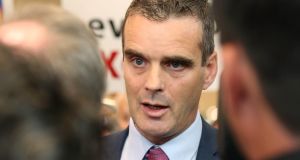 IFA president Joe Healy: “The tragedy that the Kehoe family are enduring this week with the tragic loss of Martin jnr is hard for the whole farming community.” Photograph: Finbarr O’Rourke

“Every farm death and accident is like a dagger through the heart,” Irish Farmers’ Association (IFA) president Joe Healy said on Thursday.

Mr Kehoe (33), a father of three from Foulksmills, New Ross, died on Tuesday when he was overcome by molasses fumes at the family farm.

“The number of farm deaths this year has now reached 16 and this is very high for this time of the year. Our attitude within the IFA is that we need to change the behaviour of people in the farming community. My own father used to say to me ‘ask yourself when you’re going to do a job, what can go wrong’,” said Mr Healy.

“The tragedy that the Kehoe family are enduring this week with the tragic loss of Martin jnr is hard for the whole farming community. When our generation talks about ploughing, we automatically think of Martin Keogh, who was a champion ploughman.

“Everything the Kehoe family did was spectacular in the farming world, so this tragedy is particularly devastating. No matter what kind of safety plans are put in place, sometimes accidents still happen and this week in particular has highlighted this,” said Mr Healy.

The IFA president said that trade issues must be a top priority for the Government in negotiations. Mr Healy said the Irish agrifood sector was the most exposed sector to Brexit.

“My thoughts and the IFA’s thoughts on Brexit is that it is the biggest threat to Irish agriculture in this generation’s lifetime. It’s by far the biggest challenge the farming industry is facing.

“There has been a lot of talk but still no solid plan in place. From the very start and what we have been lobbying for is to do the utmost to remain the closest possible trading link with the UK, but also to have the UK market and the value maintained.”

The IFA president noted the most straightforward solution to minimise the disruption to trade was for the UK to remain within the EU’s customs union and Ireland should make this a top priority.

“When we have access to a market that is being undermined by cheaper foreign imports from other countries. We want the cap to be adequately funded, we talk about €4 billion worth of Irish product going into the UK.

“Our government has a huge job ahead of them to save the Irish agricultural industry. To do that they need to get Europeans on side,” said Mr Healy.

Among Thursday’s high-profile attendees at the Co Offaly event were Taoiseach Leo Varadkar . Speaking ahead of a meeting with British prime minister Theresa May, Mr Varadkar said he would be emphasising the advantage of maintaining free trade to both countries. “About 40 per cent of our exports go to Britain. I was looking at it today and was fascinated to learn something that I didn’t know before and that is there is almost as much trade going the other way.

“We might sell €5 billion in agrifood produce to Britain. They sell about €4 billion to us.”

1 EU divisions laid bare by ‘frugal four’ Covid recovery proposal
2 Player Wills site: Hines and APG to seek permission for 416 homes
3 Pricewatch: Coronavirus has given us four categories of shopper
4 Eir sells mobile mast infrastructure company for €300m
5 Pilita Clark: A lot of us are losing it in lockdown – but we really shouldn’t
6 Economies can be restarted if bold and imaginative choices are made
7 Bayer reaches agreement in 125,000 US cancer lawsuits
8 Several jobs saved after sale of office supplier Spicers Ireland
9 Reopening economy does not cause coronavirus spike – researchers
10 Developer O’Flynn calls for task force to deal with housing crisis
Real news has value SUBSCRIBE