Despite biblical flooding, faithful flock to final day of Ploughing 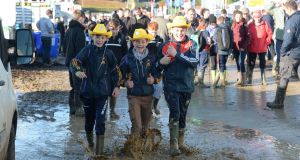 Despite a deluge of rain and flooding, overall attendance at the National Ploughing Championships was up by 8,500 on last year’s record.

Organisers said the number of people who went to the event over the three days from Tuesday to Thursday was 291,500, with 92,000 arriving for the last day of festivities at Screggan, Co Offaly. The previous record was set by last year’s event, which had an attendance of 283,000.

Staff and volunteers at the Ploughing worked through the night on Wednesday to drain flooding to prepare for the final day, with Taoiseach Leo Varadkar among the high-profile guests.

Heavy rain on Wednesday caused disruption to exhibitors and organisers, but The National Ploughing Association said its staff, along with farm relief service workers and volunteers, worked through the night to restore the site.

Assistant MD of the National Ploughing Association Anna Marie McHugh told Midlands 103 of the hard work: “We had a number of volunteers who worked through the night to restore the site. They were going up and down the aisles sweeping and putting down more bark. The guys from the tracking company were moving panels on the ground to other places around the site.

“Nobody went home, they said, ‘Look we are going to be here until the end.’”

While some exhibitors had to downsize their stands or leave after Wednesday’s washout, most stayed put, a spokeswoman told The Irish Times. Tractors and slurry tankers remained in place on site yesterday where some patchy flooding remains.

While the location for next year’s event has not yet been announced, cathaoirleach of Offaly County Council Liam Quinn is hopeful it will return to Screggan. “I’ve had a word with organiser Anna May [MCHUGH)]and made it clear that we in Offaly for our part would love to see it return here next year,” he told Midlands 103.