Minister may grant stamp duty concession to some farmers 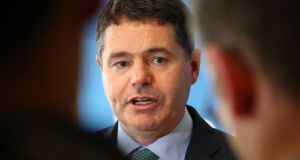 Minister for Finance Paschal Donohoe is likely to reverse the steep increase in stamp duty for non-residential land specifically for a small group of farmers inheriting land from their parents. File photograph: Colin Keegan/Collins Dublin

Minister for Finance Paschal Donohoe is likely to reverse the steep increase in stamp duty for non-residential land for a small group of farmers inheriting land from family members.

In Tuesday’s budget, Mr Donohoe announced that non-residential stamp duty was to increase from 2 per cent to 6 per cent with immediate effect.

Farming organisations reacted with anger to the change, as all transactions on farm land are now liable for the new, higher rate.

However, while the Irish Farmers’ Association (IFA) has called for the increase to be reversed for all land being transferred or sold to active farmers, any concessions are likely to focus on a smaller group of farmers who are inheriting land from blood relatives.

Qualified farmers aged under 35, as well as those inheriting land from relatives aged 67 or younger, already get exemptions or concessions on the tax.

The difficulty has been caused for farmers who are not under 35 and are receiving a farm transfer from a relative aged over 67. Until Tuesday, they paid stamp duty of 2 per cent, but they are now liable for a duty of 6 per cent.

Farm organisations and Opposition representatives have highlighted this group, saying that, overnight, they were faced with three-fold increases in their stamp duty bills.

The Irish Farmers Journal reported that a farmer’s son from Co Tipperary, Bill Burke, whose father was aged over 67, saw his stamp duty bill for taking over the farm rise from €25,000 to €75,000. “It makes it an unpayable amount,” he told the publication.

Mr Donohoe and Minister for Agriculture Michael Creed have had several discussions on the issue since Tuesday. According to a spokesman for Mr Creed, “both departments are committed to examining the age threshold in the context of the Finance Bill”.

The Bill, which gives legislative effect to budgetary changes, will be published next Thursday.

Mr Donohoe is also expected to put in place in the Bill a transition arrangement to facilitate vendors who signed contracts before budget day.

The IFA has called for a much wider exemption for agriculture.

IFA president Joe Healy said its executive council had resolved that the old stamp duty of 2 per cent should apply to all land going to active farmers.

“The Finance Bill must provide for land that is purchased or transferred and used for farming, to remain at the 2 per cent stamp duty rate,” he said.

This would apply to farmers who wish to enlarge their agricultural operations by acquiring additional farm land.

The Government is not likely to accede to the demand, according to sources.