What’s on the minds of farmers at the Ploughing Championships?

Almost 300,000 people will travel to Screggan in Co. Offaly over the three days of the 2017 National Ploughing Championships. 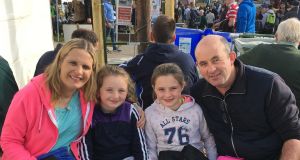 Brexit is one of the greatest issues facing farming families in Ireland, according to concerned farmers who visited the Ploughing Championships in Co Offaly.

“My alarm went off at 4am this morning to go milk the cows; farming doesn’t stop just because we take a day off,” says John Carley.

The dairy farmer from Ballintober, Co Roscommon – along with his wife Catriona and daughters Maebh (8) and Emily (10) – made the journey to Screggan for a family day out.

For this family one of their main concerns is the uncertainty surrounding Brexit, and the implications this is going to have on their business and family.

“We are dairy farmers so the fluctuation in milk prices along with Brexit are two of our main concerns. 2016 was a very, very tough year for us and a lot of other farming families, but, thankfully, this year has been a little better,” says Mrs Carley.

Her husband, who trained as a carpenter, told The Irish Times that the family would take Brexit how it comes but it was a worrying time for farmers. “There’s a lot of uncertainty surrounding Brexit, but we will have to wait and see. I’ll take it how it comes, and see what we can do. I’m a full-time farmer with five children so it’s costly for us.

“Farm costs are high, and when you have a bad year like last year it can set you back. I start work around 5.30am each morning and going until maybe 8pm in the evening. That’s the realities of life on a farm. It’s seven days a week.” 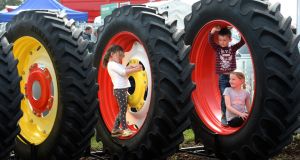 Noel and Majella Clune travelled from Co Clare with their four children to experience the “thrills” of the championships.

“We are beef farmers primarily. We have a big concern with Brexit, and what this will mean for us in terms of subsidies. If they drop it will have a devastating effect on many farming families,” said Mr Clune.

If a “hard” Brexit is to take place the family says it will see a large decrease in the revenue generated from their farm in Co Clare.

Making a living from farming is getting increasingly difficult, and Mr and Mrs Clune would be hesitant for their children to follow in their footsteps.

“Making money out of farming alone is very difficult. We wouldn’t discourage it, but as long as they have another job then farming could be their hobby,” said Mr Clune.

“The income is too low nowadays to try and survive,” added his wife.

For sisters Eithne McCarthy and and Corinne Smith from Co Louth, they have happy memories of growing up on a farm, but say “making a living” from farming is the hardest aspect to any farm.

“We came from a dairy farming background, but with all the subsidies cuts I don’t think a full family could survive on the income being generated from farming where as we were reared on it,” Mrs McCarthy told The Irish Times.

Given the testing times there is for the farming community, the sisters said they would probably discourage any of their children from taking on a life in farming. “You need a full-time job if it’s a small farm. The income alone isn’t enough,” added Mrs Smith.

All roads might lead to Tullamore this week for the ploughing, but that does not mean farming life stops. For Catherine Morris and daughter Anne-Marie the ploughing brings back happy family memories.

“We have been coming to the Ploughing Championships for years. We got rid of the cows a few years ago when my husband got older, but our whole life has been farming,” said Mrs Morris.

“It’s hard for younger people nowadays to make a living. It’s a tough life, and as we have seen many of our young farmers in rural Ireland have gone abroad. Brexit won’t help this matter.”