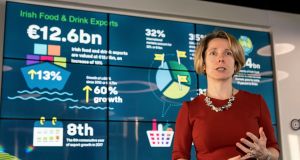 Delays and tariffs could hit Irish food exports to the UK and EU in the wake of Brexit, a report commissioned by State body Bord Bia warns.

Bord Bia’s Food and Drink Supply Chain Logistics: Strategies for Success, published on Tuesday, predicts that Brexit could hit Irish food exports destined for the EU but travelling through Britain.

“A significant risk which has been identified is the potential disruption to the frictionless movement of exports through the UK to other export markets,” the report says.

“These product flows could be subject to future tariffs of delays, and new supply chains to service existing markets need to be explored by companies.”

Delays could hit products being shipped via Britain but bound for other EU countries in an scenario where the UK and Europe do not operate within the same customs regime.

The Bord Bia report suggests that these delays could be as little as five minutes for straightforward loads, to much longer periods for more complex shipments to multiple customers.

This could have particular implications for products with shorter shelf lives, the report warns. It suggests a number of options including using alternative routes or intermediate warehousing.

If the EU and UK were to operate different tariff structures, then that could hit Irish food and drink exports to Britain, primarily by driving up their cost, the report says.

“With this extreme scenario, Irish producers would need to review both their manufacturing sourcing options and their target markets.”