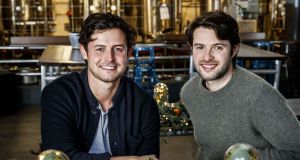 Having trained at Ballymaloe Cookery School, Jack Kirwan began making and selling fresh juices out of Avoca in 2013. The concept evolved, leading to the founding – with his brother Theo – of Sprout & Co, a chain of quick-serve lunch spots, with a focus on local, seasonal food. In June they opened their seventh restaurant.

What’s sets your business apart from the competition?

I think, from the start, we were very focused on the provenance piece – having a genuine story and that transparent link to our growers and trying to tell that story to our customers.

We have a slogan that says “local where possible”. So if we are creating a new product we will first try to find a local grower we can go to and link-up with and then we build the recipe around that.

One of the best pieces of advice I probably got was to “start a business in something you love doing” because obviously you’re going to be working very hard at it.

Trying to run two companies at once. We previously had a juice wholesale business and then we opened the restaurants. And I had this idea that it was easy to juggle two things at once. While they were both food businesses they were totally different. And I suppose the biggest mistake with that is, like with anything, you have to be so focused, ruthlessly focused, on what you’re doing [with a start-up business]. And I kind of learned after a couple of years with that, that if you didn’t have your mind set on one they’d both fall down.

We opened Sprout on Exchequer Street this summer, so that is our seventh store in 2½ years. And we’re employing over 100 people, which is pretty exciting.

There’s a company in the UK called Pret a Manger. I’ve always thought it was a great concept, and the founders of that, Julian Metcalfe and Sinclair Beecham, managed to scale up a food business without compromising on their people.

People always talk about companies compromising on the product, but I think they managed to scale up and find a way to not dilute how they treated their people.

Based on your experience in the downturn, are the banks open for business to SMEs?

Yes and no. I think some of them that claim to be backing SMEs are not, while others are. Certainly one of the banks was very positive with us and worked with us when our existence was questionable.

And there’s the government guarantee scheme whereby they guarantee a loan for an extra per cent or two in interest. And that certainly was very helpful for us when we were getting started.

What one piece of advice would you give the Government to help stimulate the economy?

I think there’s a really interesting thing that’s happening in the UK at the moment. The high street has been decimated over there because of online shopping. And there’s a huge amount of talk around removing business rates from the high street. It could be a very forward-thinking thing for the Irish Government to start thinking about this before [things go the same way here].

Things like that could make high street shops more competitive and able to compete with online. And that would have a knock-on effect for restaurants, because people, for example, go out to shop Grafton Street and then go to the restaurants on the periphery.

A lot of businesses fail at that. Because you have to be relatively good at lots of different things. And if you fall down on one of them you can suddenly be out of business. So I certainly had a huge amount of sleepless nights the first year or two.

We’re excited about continuing to grow. But we’re keen to avoid the homogenisation that tends to happen with expanding businesses. It’s important to us that each Sprout & Co has soul and a unique atmosphere.

Being close to our growers is vital too so that we can try and get produce that is served within 24 hours of being picked. So if we were to move to a new city we would start from scratch with our supply chain.

I think in a sense right now – and this might sound a bit ludicrous – it is probably invaluable because I’m only 29 years old and I do feel like we’re only getting started with this. So whatever it’s worth to an outsider now probably wouldn’t be enough for me.