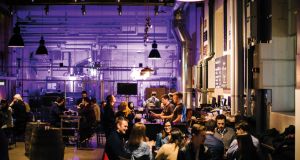 The Open Gate Brewery is to be expanded

Having opened its experimental brewery to the public for the first time nearly three years ago, Guinness is now planning to expand the Dublin-based facility to offer food as well.

The Open Gate Brewery, which allows beer enthusiasts to try beers that aren’t yet commercially available, has been open to the general public from Thursdays to Saturdays since late 2015. While the brewery has occasionally served food with its pints, Guinness owner Diageo is now planning to significantly expand on this with a proper food service.

The drinks gianthas just received planning permission to install a small new kitchen area within the public bar area, which is located within St James’s Gate.

“The additional kitchen space will allow the Guinness brewers and the food team from the Guinness Storehouse, to work closely together to develop seasonal menus that perfectly complement the latest experimental brews on tap at the Open Gate Brewery,” a spokesman for Diageo told The Irish Times.

A number of popular beers that were developed and first served at the brewery have gone on to be made more widely available. These include the recently launched non-alcoholic craft lager Pure Brew, and Hop House 13, which notched up sales of 25 million pints in Ireland in 2016 with net sales up 31 per cent year on year.

The expansion at St James’s Gate comes as Diageo officially opened its first US Guinness brewery in 60 years on Friday.

The new $90 million Open Gate Brewery and Barrel House in Relay, Maryland includes a 10-barrel brewhouse and a 100-hectolitre brewhouse. While Guinness itself will continue to be transported to the US from Dublin, other brands such as Guinness American Blonde Lager will now be brewed locally.

The last time Guinness beer was brewed in the US prior to the new brewery was in the early 1950s in New York.

Guinness was established in 1759 when Arthur Guinness signed a 9,000-year lease on St James’s Gate Brewery. It is now brewed in 49 countries and sold in more than 100 countries with more than 1.8 billion pints of stout drunk each year. The biggest selling markets for Guinness are Britain, Ireland, Nigeria, the US and Cameroon.

1 ‘I don’t need to do any of this. . .I don’t actually need to work.’
2 Admission of mistake in Oxford vaccine dose raises doubts over reliability
3 Direct sea routes to Europe offer certainty in choppy Brexit waters
4 Only way is up for Stripe as valuation skyrockets
5 Promontoria barred from pursuing doctor over Ulster Bank loan
6 Basic income for all: Has the Covid crisis given us a new economic model?
7 Unilever’s Dutch and British arms merge after 90 years ahead of Brexit
8 There was no vaccine for Anglo: Why the last crisis was different
9 ‘Make plans but don’t hold on to them too seriously’
10 Fiona Reddan: Who’s afraid of Revolut? Not AIB and BOI it seems
Real news has value SUBSCRIBE