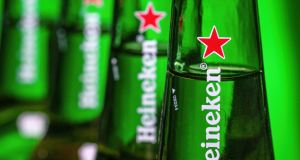 The $3.1 billion (€2.7 billion) investment - which would give Heineken a stake in CRH (Beer) Ltd, which controls CR Beer - comes as the Dutch brewer has struggled in China

Heineken is buying a 40 per cent stake in the parent of China’s largest beer company in a multibillion-dollar bet it can challenge arch-rival AB InBev, the Budweiser maker that is by far the leading foreign brewer in the world’s biggest beer market.

The $3.1 billion (€2.7 billion) investment – which would give Heineken a stake in CRH (Beer) Ltd, which controls CR Beer – comes as the Dutch brewer has struggled in China. It reported volume growth of about 1 per cent in the first half of 2018, compared with AB InBev’s 3 per cent. Its China business is close to break-even but still lossmaking.

Heineken, which has only a 0.5 per cent share by volume of the Chinese beer market, would merge its own China operations with CR Beer-owned Snow Breweries, brewer of the world’s top-selling beer by volume, Snow. AB InBev has 16 per cent of the Chinese market, according to Euromonitor.

CR Beer is a unit of China Resources, a sprawling state-run conglomerate. Heineken will end up with a 21 per cent stake in the brewer, which will be given a licence for the Heineken brand.

China accounted for $83.3 billion in beer sales last year, but volumes have been falling since 2014 as consumers switch to alternatives such as wine, meaning growth can only come from selling higher-end brews as tastes shift towards the premium end of the market.

Jean-François van Boxmeer, chief executive of Heineken, said CR Beer is “everywhere in the country, but they lack an international premium beer”, making the Chinese group’s distribution network and Heineken’s brands, which include Tiger and Amstel, a good match.

“They have what we don’t have and we have what they don’t have, so it’s a win-win situation,” he added.

CR Beer chief executive Hou Xiaohai said the companies’ “long-term goal is to gain a dominant position in China’s high-end beer market . . . We plan to catch up with our competitors in the next five to 10 years.”

Analysts were sceptical whether Heineken could make up ground on Budweiser in the short term, even with CR Beer’s help. Euan McLeish, a senior analyst at Bernstein, said quick gains would be limited by Heineken’s higher price, which is at a 25-30 per cent premium to Budweiser, a gap CR Beer said it intended to maintain.

“Heineken are effectively exchanging a small, loss-making, wholly owned business for an expensive, long-dated option and a 20 per cent stake in the CRH dividend stream,” said Mr McLeish.

As part of the deal, CR will buy a 0.9 per cent stake in Heineken for €464 million and Heineken will allow CR Beer to use its international network to sell Snow beer.

Some partnerships between foreign brewers and large Chinese beer groups have struggled. Japan’s Asahi sold its 20 per cent stake in China’s Tsingtao – the country’s second-biggest brewer by volume – in December after years of being frustrated in its attempts to push its partner towards higher-end beers.

“CR are the biggest, and they are state-owned, so they have a lot of government resources compared to other companies,” said Zhu Danpeng, an independent industry analyst. But he added that “CR doesn’t have experience with premium beer”. Snow beer has been hit by the shift to higher-end brews.

China Resources bought the 49 per cent stake in Snow Breweries from SABMiller, its previous foreign partner. SABMiller sold its Snow stake to get regulatory clearance to merge with AB InBev in 2016, creating the world’s largest beer company.

Mr Zhu said the fight for China’s premium beer market will become a three-horse race among CR Beer, AB InBev and Carlsberg, which has a 5 per cent share of the Chinese market by volume.

Shares in CR Beer, China Resources’ Hong Kong-listed brewery unit, jumped as much as 10.4 per cent in morning trading in Hong Kong following the announcement of the deal, but the gains then reversed, with the stock down 1 per cent at the close of trade.