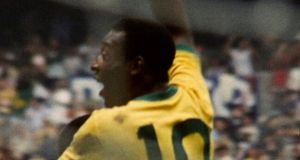 Pelé during the 1970 World Cup: ‘is the first World Cup broadcast in colour and he’s wearing what I think is the greatest football strip of all time’

There have been major documentaries on Zidane, Ronaldo and Paul Gascoigne. There has even been a well-regarded documentary chronicling Doncaster Rovers in the 1990s, a time when Keepmoat’s finest were regarded as the worst team in Britain.

It seems inconceivable that we’ve had to wait until 2021 for a definitive chronicle of Pelé, the footballer who, by many and various metrics, was the greatest soccer player of the 20th century, and a man nicknamed O Rei, or the King.

Pelé is not like any other sporting hero, insist David Tryhorn and Ben Nicholas, the directors of a new feature-length documentary for Netflix.

“We go out of our way not to compare him with anyone,” says Tryhorn of the only footballer to win three World Cups. “It’s pointless to discuss him in terms of cross-generational references, with Messi, for example. We’re dealing with the Elvis of his sport. The Neil Armstrong. Only one person can be the first.”

“Even in a non-sporting way we know we’re never going to make another film about someone this famous,” adds Nicholas. “Simply because fame doesn’t work like that any more. The type of fame that Pelé has is very different to the type of fame that exists today. Everyone else looks small fry in comparison.”

The filmmakers have pedigree. Their first feature, Crossing the Line, chronicling the US Olympian Danny Harris’s descent into crack-cocaine addiction, won the best-documentary award at the 2017 British Sports Journalism Awards. Tryhorn has also produced Kenny, a documentary about the Liverpool legend Kenny Dalglish.

“We come from footballing families,” he says. “We watched a lot of VHS footage growing up.”

Previous attempts to bring Pelé’s life to the screen include the 2016 drama Pelé: Birth of a Legend, starring Vincent D’Onofrio as the Brazilian coach Vicente Feola and Colm Meaney as the English coach of Sweden’s national team in the 1950s, George Raynor; 2004’s Pelé Eterno, by the Brazilian director Anibal Massini, was made for an entertaining greatest-goals compilation. The new Pelé film is a much deeper delve.

“That was kind of our initial conversation really,” says Tryhorn. “We’re in a bit of a golden period for sport docs at the moment, and we were talking about the stories that haven’t really been done. And we realised this story hadn’t really been done definitively.

“When you dig a little deeper you realise we all have this very superficial knowledge of the Pelé story. So that’s what we set out to do. We wanted to humanise the man behind the myth. We wanted to contextualise him, to explain how and why he became such a significant figure.”

I thought: wow. Because that silhouette. The hair. The profile. The smile. It’s the same one you can see in any of the archive images. It hasn’t changed

There followed many months of negotiations and a year of transatlantic meetings between the British filmmakers and the small team of confidants that currently surround the former World Cup star. Thus, aged 80, Pelé, now “in contemplative mood” as Nicholas puts it, was interviewed by Tryhorn, who had lived in Brazil and is fluent in Portuguese, on nine occasions over 18 months.

There were several key challenges. Both the subject and many of his contemporaries who appear on camera in the film – including fellow Santos players Dorval, Coutinho, Rivellino and Jairzinho, who were part of the World Cup-winning Brazil national team with Pelé – are often recalling events that happened 50 years and longer ago. There were, additionally, several interview sessions required to get past the stock answers that one might expect from a man who has, as the filmmakers note, been previously asked every question on every subject every time he leaves his house.

And then there was the Pelé factor. It never gets old.

“He’s kind of a crazy mixture of unbelievable aura and charisma, yet he’s also this humble guy,” says Nicholas. “He always goes out of his way to make you feel at home. But every now and again – like one day towards the end of filming when we were all in the garden talking – he arrived. And you just see the silhouette through glass. And I thought, Wow. Because that silhouette. The hair. The profile. The smile. It’s the same one you can see in any of the archive images. It hasn’t changed.”

The documentary draws parallels between Pelé’s record-breaking World Cup performances and key moments in Brazilian politics and identity. As the film’s producer, Kevin Macdonald, has it, Pelé “did so much for Brazil. And you could argue that he was one of the key figures in creating the modern notion of what Brazil is.”

Pelé, according to both Nichols and the man himself, emerged at precisely the right historical moment when Brazil was transforming from a crumbling and corrupt postcolonial outpost. The Brazil he first won the World Cup with was not the country of Copacabana Beach and Christ the Redeemer and silky football that we immediately conjure today.

There are, certainly, obvious and irresistible analogies between Pelé’s superstar World Cup debut, aged just 17, in 1958, and the birth of modern Brazilian identity. The military coup of 1964, meanwhile, which established a dictatorship and the end of democracy, roughly coincides with Pelé’s disastrous 1966 World Cup, during which he is targeted by rival players, sidelined by injury, and forced to watch helplessly on as title holders Brazil crash out early, following losses to Hungary and Portugal.

It’s a relationship that was problematic at best: while being cheered and feted by Brazil’s rulers, he was, according to records released in 2013, being investigated by Brazil’s 1964-1985 military dictatorship. Equally, he was criticised by many Brazilians for not taking a harder line against the military junta. While sifting through archive footage during the making of the film, Tryhorn recalls vox pops taken from members of the public during the 1970s in which “they absolutely hammer him”. He remains a controversial figure for many Brazlians.

On camera, however, Pelé continues to defend his apolitical stance during his World Cup years: “I’m not a politician. I’m a Brazilian. I want the best for Brazil, but I can’t change the laws. I had problems during my career, because people confused politics with soccer.”

There are some wonderful moments in the film. Not least when its subject is moved to tears watching footage of himself during the 1970 World Cup, as a frenzy of fans surround Pelé at the tournament’s dramatic conclusion.

He wasn’t supposed to be there. He was only 29 at the time, but he had not intended to play. He had bulked up; many thought too much. There had been difficulties with the national coach. João Saldanha, the coach and a communist, was sacked by the military junta three months before the World Cup.

“Watching the 1970 World Cup,” says Pelé. “If you’re a soccer player, starting with the national team at 15, 16 years old, and then you’re in the stands watching the World Cup, your team is playing but you can’t join them and help them. It’s something ... it’s an amazing experience. It’s not suffering per se, but it’s like not being able to do what you really desire. It’s like starving and not being able to eat.”

“There’s something about the final way that he talks about relief,” says Tryhorn. “You’re expecting him to talk about joy and happiness and for him so relieved shows that this is a combination of a journey.”

“It’s like a climax from a Ridley Scott film,” says Nicholas. “It’s a set piece you can’t ignore.”

“While travelling around the world, soccer gave me this opportunity, this wonderful thing that is meeting people,” Pelé says. And within this story, I met the president, athletes, famous politicians, singers, magicians. And soccer gave me the opportunity to meet and talk to those people.”

Pelé is on Netflix from today