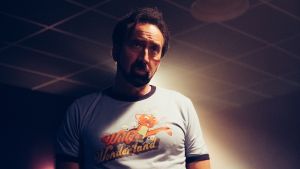 Nic Cage’s journey through the Universe of Atrocious Film has been under way for around 20 years. Still in his mid-50s, he should, good health and the Lord willing, be continuing his exploration for decades to come. Or is he, like the weeping Alexander, ready to accept there are no worlds left to conquer?

One certainly senses no great enthusiasm in his latest trudge through the sewers. We could at least once trust Nic to put his all into every performance. Whether he was throwing vampires into wood chippers or driving Ford Mustangs off cliffs, Nic was always the hardest working man in the grindhouse. Every now and then the toil has paid off with a Mandy or Colour out of Space.

For most of this bizarre exploitation flick he is, despite appearing in virtually every scene, not doing anything at all. His unnamed character remains entirely silent throughout the picture. For the opening 30 minutes or so, after driving into a scary Nebraska town, he just stands around while stuff happens somewhere nearby. Maybe they didn’t even give him a script. Perhaps they just told him where to lurk while the animatronic weasels and alligators chewed up prying teenagers.

Now, I’ve got your attention.

Clearly inspired by the horrifying mechanical creatures that traumatise American children in Chuck E Cheese outlets — happily never a phenomenon here — Willy’s Wonderland has a cadre of serial killers perform a satanic ceremony that propels their psyches into just such a collection of anthropomorphic vermin.

The unfortunate Nic is expected to do away with the possessed creatures and render the amusement facility safe for commerce again. (If you don’t quite follow then fret not. The film stops halfway through and invites one of the younger characters to talk us through the whole deranged backstory.)

Nobody without a spear through their head could sincerely describe Willy’s Wonderland as a good film, but it is trash with a commendable pedigree. This is the sort of comedy shocker — as harmless as it is brainless — that Roger Corman has been producing (sometimes in Ireland) since before Mr Cage was born. Corman is, alas, not involved, but, like so many of his films, Willy’s Wonderland involves evil hicks, disembowelled teenagers and just a bit of grunty sex.

Can we really blame Cage for lending his efforts to the project? Alongside the rights to use a bit of Freebird in the closing scene, his fee was, surely, the only significant expense in the budget. But, without Nic saying “yes”, you would never have got the chance to consider the film’s humble merits before streaming something else instead. The man is doing the industry a service.

Video on demand from February 12th