Slalom: A film as chilling as its permacold environment 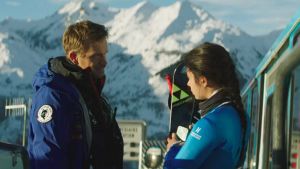 Skiing and winter sports typically lend themselves to lighter movies like Cool Runnings or Eddie the Eagle. That association adds even greater punch to Charlène Favier’s carefully calibrated feature debut.

Lyz (Noée Abita), a hugely ambitious 15-year-old student, is accepted into a fancy ski school in the French Alps. A gifted athlete, she’s flattered by the attention of her dashing, driven coach Fred (Jérémie Renier). Lyz’s mother has accepted a job (and a new lover) in another city and while the fiercely independent teenager is determined to prove herself on the slopes, with or without family. “I just want to,” she insists sulkily. Her isolation brings her closer to Fred, who grooms her for championships and, alas, who grooms her in other respects.

It’s a recipe for an emotional journey to match the trajectory of the title, but director Charlène Favier’s script, co-written with Antoine Lacomblez and Marie Talon, is as chilly as the permacold of its surroundings, and punctuated by DOP Yann Maritaud’s serene, snowy tableaux.

Abita makes for a steely yet intensely vulnerable heroine. Her relationship with the predatory Fred is a knot of teen crushing, striving, loneliness, and confusion. It works, not accidentally, to isolate her further from her peers. Renier, star of In Bruges and Double Lover, is simultaneously charming and terrifying. Even his instructions to his young charge (and target) sound like gaslighting. “Just breathe,” he tells her, repeatedly.

It’s effective drama but extremely difficult viewing, especially for viewers in a country that has been rocked by decades of sexual abuse scandals. The film’s superficial relationship with against-all-odds sports movies – given the sport, it’s impossible not to think of an Olympic-conquering Robert Redford in 1969’s Downhill Racer – adds to the sense of unease.

On Curzon Home from February 12th