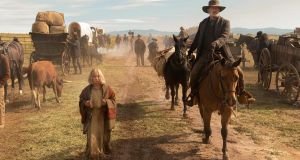 Helena Zengel and Tom Hanks in News of the World

NEWS OF THE WORLD ★★★★☆
Directed by Paul Greengrass. Starring Tom Hanks, Steve Boyles, Helena Zengel, Tom Astor, John Travis Johnson. Netflix, 118 min
Charming, low-key western – not all what one would suspect from the habitually hyperactive Greengrass – featuring Hanks as a grizzled US civil war veteran accompanying Zengel’s traumatised orphan back to her family. He reads the newspapers for money. She becomes his reluctant helper. There is some cautiously staged action, but the film is mainly a duet between actors who, though born half a century apart, remain perfectly in tune throughout (when not deliberately sparking discordancy). Young Zengel, breakout star of the excellent German film System Crasher, resists all temptations to play cute. DC

Gripping drama concerning a teenage skier who falls into an abusive relationship with her older coach. It’s a recipe for an emotional journey to match the trajectory of the title, but director Favier’s script, co-written with Antoine Lacomblez and Marie Talon, is as chilly as the permacold of its surroundings, and punctuated by DOP Yann Maritaud’s serene, snowy tableaux. It’s effective drama but extremely difficult viewing, especially for viewers in a country rocked by decades of sexual abuse scandals. TB

Controversial Golden Globe-nominated musical drama starring Hudson as guardian of an autistic half-sister. Sia’s directorial debut has garnered considerable flak for casting Ziegler, who doesn’t have autism, as the teenager. Her performance is, it transpires, the best thing about Music. For friends and family of those of the spectrum, it’s a revelation and an acknowledgment that autistic people can be remarkable without having remarkable abilities. How one feels about the musical numbers will ultimately be determined by one’s fondness for Sia’s oeuvre. TB

Where does Nic Cage dig this stuff up? Clearly inspired by the horrifying mechanical creatures that traumatise American children in Chuck E Cheese outlets, Willy’s Wonderland has a cadre of serial killers perform a satanic ceremony that propels their psyches into just such a collection of anthropomorphic vermin. An unspeaking, frequently motionless Nic must sort the demons out. It’s utter rubbish, but rubbish of a grindhouse stripe that Roger Corman might appreciate. For once, the star is barely trying. DC