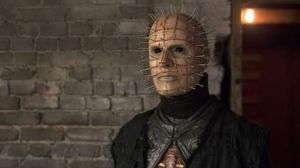 Hellraiser: Judgment is one for Hellraiser completists only. Assuming there are any left

As Jean-Paul Sartre almost had it: hell is another Hellraiser movie. Pinhead had promise. Clive Barker’s pointiest creation made his big-screen debut in 1987 when, thanks to Doug Bradley’s performance and memorable make-up design, the monster looked at home in the decade that birthed Freddie and Jason.

Many instalments before this, the 10th film of the series, the franchise’s expanding hellish mythology around the sadomasochistic Cenobite sect was stretched thinner than flayed skin (yes, this one has a flaying). Never mind hell: for most of this century, Hellraiser has been condemned straight to DVD .

The new entry, as devised by special make-up effects artist Gary J Tunnicliffe, who, after Bradley, has been Hellraiser’s Most Important Player since Hellraiser III: Hell on Earth, does nothing to stop the rot.

A hasty afterthought, Hellraiser: Judgment shared a producer in Michael Leahy and was shot back to back with Children of the Corn: Runaway, the 10th film in another declining franchise, in order to allow Dimension Films to retain the rights. Dimension, an imprint founded by Harvey and Bob Weinstein, delayed the original 2018 release.

Here’s a sentence to conjure with: Harvey Weinstein was too embarrassed to promote Hellraiser: Judgment. In 2018.

Fast-forward to now and it really wasn’t worth the wait. Bradley has departed in order to escape a half-hearted, cheap-as-chips police procedural concerning three detectives – brothers Sean (Damon Carney) and David Carter and Christine Egerton – and their investigation of a serial killer known as the Preceptor, whose murders are based on the Ten Commandments.

Before you can say “Se7en”, up pops Pinhead (Paul T Taylor) to pass judgment. Or something. A pre-credits prologue in which topless, deformed women slurp up the lumpy secretions of a paedophile through tatty steampunk devices establishes both the tone and the hideous aesthetic. Later developments see Pinhead’s Cenobite faction come up against the Auditor’s Stygian Inquisition (Tunnicliffe) over Sean’s punishment; who knew that hell and bureaucracy could be so entwined?

This awful enterprise gets a solitary star – it’s a stretch – on account of its unexpectedly decent final shot and a cameo from Heather Langenkamp, the original Final Girl from A Nightmare on Elm Street. One for Hellraiser completists only. Assuming there are anyleft.

10 Tutu believes reconciliation possible for all