I Care a Lot film review: Peter Dinklage and Rosamund Pike out-villain one another 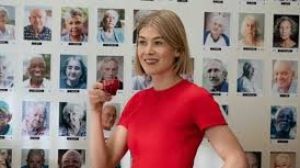 Rosamund Pike as Marla Grayson in I Care a Lot

Film Title: I Care a Lot

“Granny farming” is a modern phrase that has, in recent months, come to refer to the manipulation of mail-in senior citizen ballots in elections. A more sinister application covers elder abuse by court-appointed guardians, a phenomenon that had become persuasive enough by 2015 that the authors of a US government report were forced to concede that they couldn’t guess at the extent of the problem.

British filmmaker J Blakeson has crafted an unlikely comic thriller around scheming court-appointed guardians in I Care a Lot. The conniving Marla Grayson (Rosamund Pike, making her icy turn in Gone Girl look like a wallflower) is a professional elder guardian with corrupt doctors and care homes on her payroll. “There’s no such thing as good people,” purrs Marla over the opening credits, before swooping in to claim her latest charge, over the protests and pleas of that charge’s son (Macon Blair).

Marla’s operation is as efficient as it is sinister. Working alongside her professional and domestic partner (Eiza González), she acts on information supplied by her doctor conspirator (Alicia Witt). The latter singles out wealthy elders and deems them in need of a guardian. Marla comes to rescue, puts them in a care home, and divvies up their assets.

I Care a Lot (official trailer)

New target Jennifer Peterson (Dianne Wiest, wonderful) is deemed a “cherry” by Amos. But Marla has barely had time to paint Jennifer’s house and put it on Airbnb before red flags appear. Why does Jennifer’s overdressed lawyer (Chris Messina) turn up with a suitcase full of cash? More disturbingly, why is Peter Dinklage circling around in the back of a limousine?

Marla, as it happens, is right. There are no good people in I Care a Lot. But some bad people turn out to be worse than others.

In keeping with his nifty Stockholm Syndrome drama The Disappearance of Alice Creed, J Blakeson’s script plays mind games with the viewer. Marla presents herself as “a f**king lioness” who makes feminist noises as she tears into Macon Blair. Her gleeful malevolence, however, slowly loses its lustre.

The final act descends into chaotic silliness, but watching Dinklage and Pike attempting to out-villain one another is never dull. Deborah Newhall’s costumes would look intimidatingly power-hungry on a clothes hanger, let alone Ms Pike. And there’s a terrifying subject lurking under the dark humour.