Why are sportspeople always the cream that rises to the top of ‘Masterchef’? 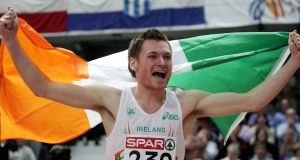 When the producers of the first series of Celebrity Masterchef Ireland called David Gillick in 2013 to see would he be up for taking part, they had one trump card above all to play. “The guy was on the phone to me saying, ‘Look, sportspeople always tend to do well on Masterchef,” Gillick says. No better way to get the competitive dander up than to crow about the achievements of someone’s would-be peers.

That producer wasn’t wrong. In 13 series of Celebrity Masterchef in the UK, a sportsperson has finished in the top two five times and has won it twice. Rugby players Matt Dawson (2006) and Phil Vickery (2011) walked off with the overall title, with track athlete Iwan Thomas, footballer Danny Mills and rugby player Martin Bayfield just coming up short.

When it came around to the Irish version, the trend held up, with Gillick going on to win the first series. Upon its return, albeit to a different channel four years later, Oisín McConville made it to the final three despite having been a burn-water novice going in. “If my wife wasn’t around, it would have been beans on toast or a takeaway for tea at the time,” says McConville. “That’s literally where I was in relation to food. I had zero experience.”

So what is it? Why is it always worth keeping an eye on the sportspeople when these shows come around? Partly, it’s the obvious – these are competitive souls, generally retired at the point where they’re going on knockabout TV shows and consequently straining at the bit to get through to the next round. But there’s more to it than that.

“What really stood to me was that I was really methodical in my process,” says Gillick. “I didn’t get caught up in the end result. It was like, ‘Okay, what are the steps that I need to do here?’ And I think there’s no doubt that’s an element that stands to sportspeople in these competitions. You have trained yourself to be mindful of the process and not to get ahead of yourself and worry about the result.”

That chimes with McConville’s experience, although he did have hurdles to jump that weren’t a factor for Gillick. Getting tuned into the lingo, for one.

“One thing I am very good at is following instructions,” McConville says, “and the second part of that first show was a bit where we were given a recipe to follow and we had to present it in the way it was presented to us a day previously. It was basically a matter of following instructions.

“My only problem there was there were words in the recipe that I didn’t understand. Like, one instruction was to reduce the sauce – I didn’t have a notion what reducing a sauce was. But once I found out, I got through it and made a really good job of reproducing what we had been shown. It looked presentable and all the elements of the original dish were in place. So that got me through.”

Once the competition started whittling down to the business end, both of them found they had tools from a lifetime in sport to help them along. McConville had to do a dessert dish in a professional kitchen in London and the first few he dished up got sent back by a sharp-tongued head chef. For someone who had been in Crossmaglen and Armagh dressingrooms since he was a child, an occasional bollocking was hardly going to cut him in two.

“You just say you’ll do it better and go again,” McConville says. “That’s where the sport comes in. In sport, your preparation is important but your performance is crucial. You train and train and train but at the end of the day, you have to perform when the whistle goes. It was the exact same with Masterchef. People walked into the room and were they prepared? Oh my God were they prepared. They had taken time off work to practise, this was their one big thing, they had spent so much time preparing.

“And then when it came down to it, when they had those 50 minutes or 90 minutes to do their dish, they really found it difficult to perform. The pressure was a factor for them. whereas once the whole thing started, that’s when my nerves went. I just got into the middle of it and I could focus and could shut everything else out.”

“Dealing with stress and pressure was one of the big things,” says Gillick. “Everybody has stress and pressure in their lives no matter what they do but in sport it comes with having to do a certain thing at a certain time and that’s the only time that counts. My event was all around a 45-second race. Everything in your life is geared towards that 45 seconds.

“When you’re in a kitchen and that pressure comes on, and there’s lights and cameras and all the stuff that goes with TV in and around you, being used to having to do it there and then and only having one go at it to get it right, that’s just something sportspeople are just used to in their everyday lives. For some others, they can crumble if they’re not as used to it.”

So keep an eye out for the sportspeople the next time one of these shows comes along. History tells us they won’t be far away when the last tuille drops.