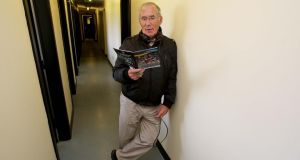 Weeshie Fogarty: the voice of Kerry football on Radio Kerry. “In Kerry I would have no hesitation in saying that people’s priorities go like this – family first, Kerry football second and maybe religion third.” Photo: Donall Farmer/Inpho

Weeshie Fogarty – the voice of Kerry football and one of the most instantly recognisable personalities in the GAA nationwide – has passed away at the age of 77.

The legendary referee turned broadcaster died at his home in Killarney, Co Kerry on Sunday.

In a lifetime devoted to Gaelic games, Weeshie was a player for club and county, a team trainer, selector, club official, referee, analyst, newspaper columnist and, finally, a colourful broadcaster, bringing the game to life in the sitting rooms and kitchens of thousands of homes in his own unique fashion through his commentaries on Radio Kerry.

He won several awards for his broadcasting skills and he had been inducted into the McNamee Awards Hall of Fame in 2016 for his lifelong contribution to the GAA.

The Killarney Legion clubman played senior football for Kerry and he won Kerry County Championship medals with East Kerry. He was also on the East Kerry panel that beat Bryansford of Down to win the first All-Ireland club football final in 1971.

When his playing days ended, Weeshie went on to become one of the top intercounty referees in the country, taking charge of the whistle for three All-Ireland football semi-finals, before turning his hand to broadcasting.

A psychiatric nurse by profession, he worked in St Finan’s Hospital in Killarney which overlooks Fitzgerald Stadium, where he made a seat in the commentary box his own over the last 20 years.

Weeshie’s Terrace Talk programme on Radio Kerry was hugely popular and he has also penned a number of books, including his autobiography My Beautiful Obsession.

In a statement, Killarney Legion said: “The word legend is sometimes over used but Weeshie Fogarty was a club legend and his passing leaves a huge void.”

He is survived by his wife Joan, son Kieran, daughters Denise and Carolann and his extended family.

Reposing in O'Shea's Funeral Home, Killarney on Tuesday  from 4.0 to 6.30, his removal will take place afterwards to St Mary's Cathedral, Killarney. Requiem Mass will be on Wednesday at 10.30am with burial afterwards in Aghadoe Lawn Cemetery, Killarney.