Meating of minds for two of Ireland’s leading butcher boys 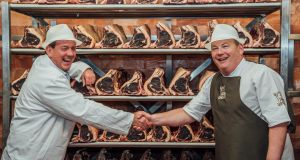 Two of Ireland’s most innovative and successful butchers have joined forces in a strategic alliance that makes Peter Hannan’s Himalayan salt-aged meat available to buy, from today, at the eight James Whelan Butchers retail outlets and through its online sales network.

Hannan Meats is based in Moira, Co Armagh and previously its products were only available to retail customers in Ireland at its farm shop, The Meat Merchant. It supplies 400 chefs in Ireland and the UK and is stocked by the luxury retailer Fortnum & Mason in London.

Pat Whelan operates James Whelan Butchers outlets for Dunnes Stores (to which he sold part of his company in 2016) in Cornelscourt, Swords, Blanchardstown, Rathmines and Bishopstown, as well as concessions in Avoca stores in Kilmacanogue and Rathcoole, and the original family shop in Clonmel.

Initially, the offering will be limited to sirloin and striploin steaks and sirloin roasts, but there are plans to expand the offering, with salt-aged lamb for the Easter market likely to be the next product to come on stream. The Hannan Meats sirloin will sell for €35 a kilo, as against €30 a kilo for the James Whelan version. It will be available prepacked, or cut to order by in-store butchers.

The two men are among the most influential players in the meat trade in Ireland. Describing the partnership as “a natural progression”, Hannan said: “We can do so much on our own, but when you combine talents, it is not twice as powerful, it can be 10 times as powerful.”

His beef is used by 400 chefs in Ireland and the UK and is prized for its quality. “You’ll never eat the same steak twice, that’s the thing about it,” says Hannan, whose maturing process brings consistency to the product. His beef is aged over a period of 28-45 days, and the Himalayan salt – a 12ft wall of 1,000 hand–cut bricks – purifies the air in the ageing chamber.

“You can age meat in a cold room, that in itself will give you something that will get better up until 21-28 days, and after that it rapidly deteriorates. What we wanted to do was to develop it in a different way, where it didn’t grow a mould and didn’t take on that blue cheese taste. We wanted to concentrate the beef flavour, rather than let it get to a point where it was on the border of deterioration, and over a period of time, we believe we have achieved that,” Hannan says.

Whelan, who has a Wagyu breeding project underway in Tipperary, and imports Iberico pork from a small-scale pig farm in Valencia, is driven by innovation and quality. “Where I see something done really, really well, I stand back and admire it and respect it.”

What he found in Hannan Meats’ beef was, “a great tasting, consistent product”, developed over many years of research and development. “I get excited about bringing something like that to the market.” His customers are “discerning about what they are buying,” he says. “ I believe the differentiator in the market is around quality and the customer recognises that.”

In time, more of Peter Hannan’s innovative products, such as sweet cured bacon racks, beef cheeks and short rib, will make it into the James Whelan distribution chain. “One of the most amazing products Peter has done in recent times is where he has brought sweetness to curing, so that you get sticky, sweet and salty together,” Whelan says.

But first, it will be spring lamb, given the salt-aged treatment. “It allows us to age it 12-14 days, a bit longer than the usual 7-10 days . A lot of people don’t eat lamb fat because it is quite indigestible, that’s because lamb fat has a higher moisture content than beef. When we remove that in the chamber, it almost goes like pork crackling – golden and bubbly and crisp,” Hannan says.

Whelan, whose company runs a butcher apprenticeship scheme, believes that his alliance with Hannan is a positive move for the butchery business in Ireland. “I see a lot of people talking about how the industry is struggling. We are building a network of butcher shops back into supermarkets . We are investing in people and in the product, to put the skill, knowledge and service back at the core of the conversation, and speciality back into supermarkets, making it accessible to people.”

For Hannan, there are economic advantages certainly, and he says he will not now proceed with his long mooted plans to create an online sales division. But for him, it’s not just about money. “We are a pair of feeders, that’s where our great pleasure comes from,” he says.