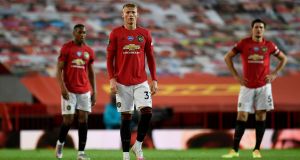 Manchester United’s impressive winning record came to an end last night as Michael Obafemi’s 96th minute equaliser gave Southampton a point at Old Trafford and saw Ole Gunnar Solskjaer’s side miss out on the chance to go third. Goals from Marcus Rashford and Anthony Martial had turned the match in United’s favour but a late corner and a bundles Obafemi finish did the damage in a match which Solskjaer said afterwards United probably didn’t deserve to win. In other soccer news, after sportspeople rallied around David McGoldrick yesterday in light of racist abuse he received online, Jame McClean pointed out in a message on Facebook that he hasn’t received any such support for the abuse he has been on the end of for years due to the fact that he doesn’t wear a Remembrance Sunday poppy.

On to rugby and last night the IRFU finally reached a pay reduction agreement with its players for a six-month period after protracted talks. Players earning over €25k will take a 10 per cent cut and a 10 per cent deferral until the end of the year it was announced last night. Meanwhile, in his column this morning Gerry Thornley writes that there are reasons to be cheerful for Munster when rugby resumes, despite missing out on the European knockout stages. “With Stephen Larkham and Graham Rowntree bringing their influence to bear over a full ‘pre-season’ as such, coupled with their new signings, Munster could be the most improved of the four Irish sides after the resumption,” he writes. Meanwhile, in Texas, former Ulster flanker Roger Wilson has found his niche in tackling the problem of bad technique in high school American football. “I’d watch the young kids playing high school football leading with their heads in the tackle and was shocked by what I was seeing,” he tells Jonathan Drennan.

1 Chairman of Fáilte Ireland resigns after it emerged he is holidaying in Italy
2 Anne Doyle: ‘Depression? I know what it is, and it’s a b*tch’
3 36 hours on Northern Ireland’s Causeway Coast: ‘Everyone is having a wild time’
4 David McWilliams: It is time for a major property reset
5 Urgent report on Dublin eviction ordered by Deputy Garda Commissioner
6 A million trees, including 400,000 oaks, to be destroyed this week
7 Frank McDonald: What’s not to like about Dublin’s new Kevin St development? Quite a lot
8 Inside the O’Brien Fine Foods factory in lockdown Kildare
9 ‘It was pitch black’ - Rescued teenager describes night afloat with her cousin in Galway Bay
10 Jennifer O’Connell: Why is Trump afraid of Kamala Harris?
11 Cousins went paddle boarding at Furbo as usual location was cut off due to Covid-19
12 Britain fails yet again to take Ireland into account
13 Restaurant review: A culinary treat in the west of Ireland
14 Inside Meghan and Harry’s broken relationship with the royal family
15 Inside the world’s largest sports air dome just outside Knock
16 ‘I’m going to ask you something,’ Sorcha goes, ‘Have you two been sleeping together?’
17 Carrick-on-Shannon native left reeling by plan to raze home
18 Mike Pence fretting as Kamala Harris shakes up Republicans
19 Life, death and the secrets that lie between
20 The hatred of HP Lovecraft: Racist, anti-Irish bigot and horror master
21 Shane Kenny convinced Achill water contamination triggered medical relapse
22 Maria Steen: Only a sick society can see children as a burden
23 Mikel Arteta given more control at Arsenal as Raul Sanllehi leaves
24 Aaron Brady, the man who said with pride he was a cop killer
25 Conor Pope’s staycation diary: ‘It’s like I’m staring at a Polaroid of my childhood holidays’
26 Animal magnetism: The Kilkenny farm taking social media by storm
27 Irish team wins international competition with dementia app
28 Trump trying to ‘kneecap’ postal service in voting row
29 Inside Meghan and Harry’s new $14.7m nine-bed, 16-bath California home
30 Fresh uniform every day? Some schools do solo runs
31 Garda killer Aaron Brady will be almost 60 by time he leaves prison
32 New Zealand Covid-19 outbreak grows as Australia still struggles
33 We need a clear message from Government on how to live alongside Covid-19
34 Nine tenants evicted from north Dublin property by men in masks and dark clothing
35 ‘Embarrassment, anger, sadness’: the decline of the great Stephen Hendry
36 Warning to beach-goers over venomous weever fish hiding in the sand
37 Housing activists assist tenants to re-enter property following eviction
38 Worst sporting moment: White knuckle ride on a hate-filled night at Windsor
39 Lebanese roots keep things in perspective for Michael Cheika
40 Turn tomatoes and feta cheese into something magical
Real news has value SUBSCRIBE