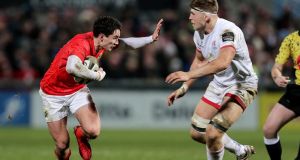 A fit Joey Carbery will be a huge boost for Munster when the season gets back underway. Photograph: Laszlo Geczo/Inpho

This week the Heineken Champions Cup organisers are expected to confirm the dates and kick-off times for the quarter-finals on the third weekend of September (18th-20th). Many of the established European heavyweights will again be there, with one notable exception of course, namely Munster.

Yet amid all the bleating about the province’s failure to conquer Europe, or even reach a final since 2008, it’s worth bearing one thing in mind. Last January was only the fourth time in the last 21 seasons that Munster have failed to navigate their way through the often treacherous pool stages.

No other club or province in Europe has reached the knock-out stages with the same regularity over the last two decades.

Munster’s willingness to roll up their sleeves and come again the following season is quite something when you think of all the disappointments over the years – two lost finals and nine semi-final defeats, of which seven have been since the 2008 success. That would have broken the spirit of lesser organisations.

For sure, their players, coaches and supporters desire more than this commendable consistency, not least in smashing through the glass ceiling that the semi-final stages have become. Their past glory days and triumphs demand it, all the more so when their noisy neighbours are hoovering up trophies – just the nine since 2008, whereas Munster’s only title since then was the 2011 Celtic League.

Their golden generation of Ronan O’Gara, Paul O’Connell et al was founded on the strength and vibrancy of their clubs. Between them, Cork Constitution, Garryowen, Young Munster and Shannon won 17 of the first 20 All-Ireland Leagues up until 2010. Since then, Leinster clubs have won seven of the last nine Energia All-Ireland League titles.

Once professionalism led to the provinces inevitably swamping the club game it was always likely that the schools/academy production line would prove more important, where Leinster have all the advantages. This was compounded by socio-economic factors which, through migration mostly to Dublin or abroad, further debilitated the Munster clubs.

In an interview in January 2016, the late Garrett Fitzgerald, Munster’s long-serving chief executive, told The Irish Times that over the previous two seasons, they had cleared 300 adult players out of the province to play elsewhere in Ireland or abroad. This was the equivalent of 20 adult rugby teams alone in that two-year period.

“Our schools game isn’t on the same profile as Leinster’s. They have 25 junior academies with full-time paid staff, putting in 4G pitches with the help of past pupils. We won the schools interpros last season, which is a miracle, and the under-20 interpros. If we do that on a five-year cycle we’d be delighted given what’s there.

“To be successful, we will always have to punch above our weight. If you look at the whole economic, commercial market, Connacht and Munster shouldn’t even be playing rugby.”

Such a comment probably doesn’t resonate well with Munster supporters, and will surprise their Connacht counterparts. After all Munster do have their history, both a bigger playing and support base, and a name with a truly global reach. So it is that World Cup winners Damian de Allende and RG Snyman have become the latest marquee names to join.

Complete sell-outs at Thomond Park may have become less frequent recently compared to the seasons immediately after its redevelopment in 2008, but by any yardstick, Munster’s support has remained strong. Of the 20 teams in this season’s Champions Cup, only one other province or club had bigger crowds than Munster (70,525) over their three home games, namely Leinster (75,259).

Admittedly these figures may not be as representative of actual attendances given the higher proportion of season-ticket holders not present, but save for Leinster not having their near 50,000 sell-out at the Aviva for their annual encounter with Munster, they are very consistent with the 2018-19 average figures.

This season’s failure to emerge from the Champions Cup pool stages was always a distinct possibility given Munster were drawn in the same group as Saracens, the reigning back-to-back champions, and Racing, twice a finalist and a quarter-finalist in three of the previous four seasons.

In addition, a newly formed coaching ticket had no pre-season with the core of Munster’s 12-strong World Cup contingent. Joey Carbery missed the entirety of the campaign and David Kilcoyne was sidelined for the first four pool games. Of the other 10, eight only made their seasonal re-appearance in the Pro 14 win over Ulster a week before the Champions Cup opener, when Keith Earls and Tadhg Beirne returned for their first Munster game of the season.

They beat the Ospreys away with a bonus point and had a drop goal to beat Racing in the draw at home. After beating Saracens at home a week later their captain Peter O’Mahony strained his hamstring minutes before kick-off, they lost Beirne for the rest of the season after 10 minutes, John Ryan followed soon after and the in-form Andrew Conway departed early in the second half. Even then they were competitive, missed a kick to go 9-3 up and overlooked a penalty for a bonus point before leading Racing away with less than 10 minutes remaining.

A disappointing campaign for sure, but hardly a disastrous campaign.

In any event, with Stephen Larkham and Graham Rowntree bringing their influence to bear over a full ‘pre-season’ as such, coupled with their new signings, Munster could be the most improved of the four Irish sides after the resumption. Much improved though JJ Hanrahan was last season under Larkham’s influence the gifted Carbery would be like a new signing if fit and healthy (touch wood) and a key component in a more inventive game.

Being idle and forced to look in from the outside on the third weekend of September should also further steel their resolve. As ever therefore, if nothing else Munster should be an interesting case study.