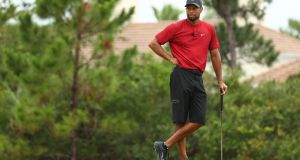 If the return of the lesser spotted tiger to rather familiar terrain for this week’s Memorial Tournament at Muirfield Village takes Tiger Woods out of self-imposed hibernation for his first competitive appearance in five months, and provides a sub-plot of its own, the primary plot line will likely feature a potential five-way battle to finish the event as the world number one ranked player.

Rory McIlroy remains in the top spot, as he has done since February. But, unlike other weeks since the PGA Tour’s restart also rebooted the world rankings, which had been frozen for three months, it is not only Jon Rahm who has the opportunity to dethrone him: Justin Thomas, Dustin Johnson and, even theoretically, Webb Simpson could assume the position.

McIlroy has struggled to fire on all cylinders since the US circuit restarted – tied-32nd at the Colonial, tied-41st at the Heritage and tied-11th at the Travelers – but has spent the past two weeks working on his game at home in Florida and returns to a course where he has had secured four career top-10 finishes. He did, however, miss the cut at last year’s event.

Only Adam Scott from the world’s top-10 is missing from the invitational tournament at Muirfield Village, which is staging back-to-back events. The difference in the course set-up from the Workday to the Memorial will mainly feature pin placements on greens where the stimpmeter readings are due to quicken from 11 up to 13 or 14.

“It’s going to be weird playing [the same] course again because it’s like you’re playing your country club for two weeks,” said Collin Morikawa, who moved from 29th to a career high 13th in the world rankings following his playoff win over Thomas in the Workday. “You pretty much have everything figured out, at least I hope so. I know Jack [Nicklaus] is going to trick the course up a lot more.

“Obviously off the tee it’s going to fit very much the same, hitting the same clubs, which I think is going to be beneficial because I see really good lines off these tees. But who knows how much the rough is going to grow in the next three days, and the greens can get backed out.

For Thomas, who was three strokes ahead with three holes to play, there is an immediate chance for redemption. “The thing that sucks about golf is it hurts. But the great thing is I have another chance [in the Memorial],” said Thomas.

“I’ve got to start another tournament on Thursday. I’m playing great. I have a great chance to win another golf tournament at a course that I obviously enjoy and I’m playing well. I just can’t beat myself up . . . I just need to execute better when I get in that situation in the future.”

This week also marks Woods’s return to action which adds further lustre to an already stellar field. Woods last played at the Genesis Invitational, where he finished 68th and left Los Angeles with the intention of returning home to Florida with “rest and training” on his agenda . He could hardly have envisaged then that the lay-off from tournament play would extend to five months but Muirfield Village has been a regular tour stop for him over the years, with five victories among nine top-10 finishes.

Graeme McDowell – one of three Irish players in the field, along with McIlroy and Shane Lowry – will team up with Ian Poulter in a match against Rahm and Tony Finau in a nine-holes skins game on the eve of the tournament that will raise funds for a local childrens’ hospital in Columbus, Ohio.

The European Tour’s restart, which got under way with Marc Warren’s win in the Austrian Open, continues with the Euram Bank Open in Austria and, again, it is a dual-badge tournament counting on both the European Tour and the Challenge Tour. Michael Hoey, who hasn’t played competitively on tour since the Cape Town Open back in early February, returns to action.