James McClean says he gets no support for abuse he receives 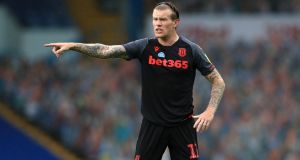 Stoke City’s James McClean has been the subject of abuse for years for not wearing a poppy. Photo: Mike Egerton/PA Wire

Stoke City winger James McClean says he has received “more abuse than any other player” during his nine-year spell in England but has had no support from soccer authorities, the media or his Irish teammates.

The 31-year-old’s comments come after Crystal Palace winger Wilfried Zaha and Sheffield United striker David McGoldrick were both subjected to racial abuse online over the weekend.

McClean has been a target for refusing to wear a poppy on his shirt on Remembrance Day after he cited the 1972 Bloody Sunday massacre, where British soldiers killed unarmed protesters in his hometown of Derry, as the reason for not wearing one.

“Driving back from training while listening to TalkSport discussing the vile racist comments this week made towards Zaha and McGoldrick on social media,” McClean said on Facebook.

“Listening to their reaction of disgust at it, and rightly so... because it’s horrendous and nobody should be subjected to that. People need to be held responsible for their words and actions.

“What leaves a sour taste though... I’ve received more abuse than any other player during my nine years in England... This isn’t a cry for sympathy, but one to ask the question (of) what is the difference?

“I’ve seen some of my fellow Irish team mates post a black square in support of anti-racism as well as posts condemning the discrimination ... have I ever seen any of them post a public condemnation of the discrimination I get... that would be a no.”

In March McClean was fined two weeks’ wages by Stoke for an Instagram post that showed him wearing a black balaclava while teaching his children what he described as a “history lesson”. “I never wanted to cause any offence but I now realise that I did so and for that I apologise unreservedly,” he said.

1 Real Madrid crash out to relentless Manchester City performance
2 FAI chairman Roy Barrett predicts sense will prevail at EGM
3 Sligo meeting abandoned after four races due to safety concerns
4 War and romance behind 147 unbroken years of the Nationals
5 Could lack of sex force players to break the NBA’s bubble?
Real news has value SUBSCRIBE
Crossword Get access to over 6,000 interactive crosswords