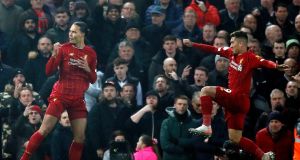 Liverpool 2, Woolly Hats 0. Not only are they back on their perch, they’re Superglued to it.

“I’ve not heard that song sung here for 30 years,” said Gary Neville come full-time when “we’re gonna win the League” bellowed around Anfield, the poor fella sounding like he wanted to projectile vomit all over The Kop.

You couldn’t but think at that moment of chef Gary O’Hanlon, who would have felt just as nauseous as Gary after the game, the fella having shared his grief earlier in the week about his six-year-old daughter telling him she was now a Liverpool fan.

“Plays a bit of tin whistle and can make a decent scrambled egg, free to a good home,” he told his anti-social media followers.

Somewhat controversially, Gary later noted that “it’s a prerequisite for Liverpool fans to be a sickening dose”, them having much the same impact on his tummy as salmonella, although when one recalls the gentle humility with which the Manchester United faithful always celebrated their successes during the Sir Fergie period, when Liverpool were well and truly de-perched, perhaps his observation was reasonable enough.

Gary might well have been buoyed by Roy Keane being hopeful-ish about United’s prospects in the very early stages of Sky’s coverage of the game, which was rudely interrupted by their need to show Burnley v Leicester. But once the team news came in there was no more hope in his heart.

“When I see people like Shaw coming back in to the team, the nearer we’re getting to kick-off, the more worried I’m getting. I’m looking at them getting warmed up, I see the silly hats . . .”

And with that, the camera picked out Luke Shaw in what looked like a perfectly reasonable hat for the chilly day that was in it. All you wondered was how Roy would have reacted if he’d tuned in to ITV’s The Masked Singer on Saturday night to see Teddy Sheringham dressed as a tree while singing Will Young’s Evergreen.

He might have pointed out that Teddy departed United 19 years ago, so he was free to dress up as a tree if that’s what floats his boat, it didn’t matter any more, but still, you’d sense he wouldn’t have been hollering, ‘Go Teddy!’

With the able support of Patrice Evra, though, his cheek muscles flexed in an outstandingly vexed manner when Graeme Souness began harping on about Anfield being the best place to play football for any player worth his salt.

Off we went, Virgil van Dijk (10ft 3in) beating Brandon Williams (2ft1in) to the ball to head Liverpool in to the lead. And then Virgil brutally assaulted/legally challenged David de Gea, resulting in Bobby Firminho’s subsequent goal being disallowed. Just the 1-0, then, for Liverpool at half-time.

Roy and Graeme ganged up on Patrice over the ruled-out goal – “why it was disallowed is beyond me . . . the game’s gone mad,” said Roy – Patrice sticking to his guns, even checking Graeme’s glass to see if there was alcohol in there.

Second half. A mighty slug-fest until, as Jamie Carragher put it, “MO SALAH, YOU LITTLE DANCER!”

To add to Gary Neville and O’Hanlon’s pain, van Dijk wasn’t even perspiring when he spoke to Jamie post-match, having the look of a man who’d done nothing more taxing than a bit of online shopping for turpentine.

“He looks like he’s just jumped out of a shop window, male model, no sweat on his head, nothing on his shirt,” said Graeme, while Patrice reluctantly purred .. . “he looked like a Rolls Royce”. He does too. How many people make defending look that beautiful?

The best contest of the day, as it proved, was the one between Jamie and Roy over whether Ole should be given more time (and loot), Jamie delicately suggesting that Roy was just backing his old mate, when he might well have skewered anyone else doing a similarly uninspiring job.

Patrice didn’t care. After the Woolly Hats lost: “I’m bleeding inside.” And that’s a sickening dose.

1 Gerry Thornley: Wild reactions to this Ireland team as fickle as the wind
2 Cheltenham keeping a watching brief on coronavirus
3 Munster were fever-tested when they arrived in Italy
4 IRFU not consulted prior to Minister Harris’ recommendation to cancel Ireland v Italy
5 Bayern Munich teach youthful Chelsea a European lesson
Real news has value SUBSCRIBE