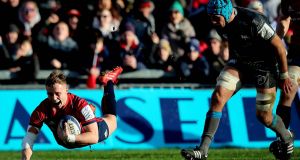 Munster’s Craig Casey scores their fourth try of the game during the Champions Cup win over Ospreys. Photo: Ryan Byrne/Inpho

Munster did all that was required of them to finish their Heineken Champions Cup campaign with a bonus point win but the atmosphere at Thomond Park was surreal given that their faint qualification hopes had died with other results on Saturday.

Conditions could hardly been more ideal for rugby with a frosty morning giving way to a crisp, sunny afternoon. All the more pity then that there wasn’t a lot more at stake in this Champions Cup game than two sides just looking for a boost for the second half of the season.

In the end, Munster were just left to rue on what might have been but Conor Murray, showing a timely return to form, said that they will just have to channel the European disappointment into performances in the Pro14.

“It was a day when we just wanted to improve as a team and show what we are capable of. We had a few tight games in this pool and it could have gone either way.

“We are not losing faith, and we will focus on the Pro14 now after we come back from international duty and drive it on and try and get better.”

Captain Peter O’Mahony said the Pro14 now becomes the priority and they must park the disappointment of not being in the knockout stage in Europe in April.

The lack of confidence which comes from poor runs was obvious in the opening half as Munster, with just two wins in their last eight games, and Ospreys with just a single victory in 15 matches this season, struggled to build phases.

Munster also got on the wrong side of French referee Mathieu Raynal and half a dozen penalties gave Ospreys a platform to open up a 6-0 lead after 14 minutes.

Outhalf Luke Price landed a couple of kicks from 40 metres, the first for a late hit by Fineen Wycherley on Price and then O’Mahony was pinged for a scrum infringement.

By then Dan Goggin had replaced Andrew Conway after the winger failed a HIA after taking a knock to the head while trying to tackle George North, adding to the concerns of Irish coach Andy Farrell after Chris Farrell was withdrawn after suffering a bruised knee in training on Friday. Keith Earls, who also suffered a knee injury in training, wasn’t considered for selection.

Munster finally got their act together and stopped giving Raynal reason to ping them and they used the possession well to surge 14-6 in front by the break.

CJ Stander got them back in contention nine minutes from the break when he finished a move where Sammy Arnold made the initial break and a couple of recycles saw Stander strike from close range.

They pushed on from there and another patient build-up in the final play of the half saw Stephen Archer score beside the right posts after they hammered away at the Ospreys line, with JJ Hanrahan adding his second conversion to put them eight in front at the interval.

Calvin Nash, starting his first Champions Cup game, Fineen Wycherley, Rory Scannell and Hanrahan all made ground in the build-up to Munster’s third try after 47 minutes and when Arnold was stopped short, Murray pounced to pick and dive over in the right corner to crown a solid display from the scrumhalf.

Hanrahan was unable to convert but at 19-6 it was obvious at that stage that all remained to be decided was the margin of victory and the crowd, given at 19,891 tickets sold but probably a couple of thousand less than that, did their utmost to push on Munster.

The bonus point should have come after 56 minutes when Arnold took a superb pass from Murray to put Rory Scannell over but he somehow knocked on as he went to touch down.

But the biggest cheer of the day came two minutes later when local lad Craig Casey, a week after coming on for his Champions Cup debut, sniped over from the base of a five-metre scrum to score after Murray was withdrawn for a HIA.

The feelgood factor continued when the promising Jack O’Sullivan came on for his Champions Cup debut when he replaced skipper O’Mahony, joining his cousins Niall and Rory Scannell on the field.

Casey then went off for a HIA after Price denied him a second try after a surging run by Jack O’Donoghue, with fullback Mike Haley temporarily switching to scrumhalf until Murray returned, while Ben Healy also came on to make his European debut. Casey returned for the final six minutes.

Munster finished on the front foot and Stander got his second try two minutes from time when he broke off the base of a five-metre scrum to complete an easy win.