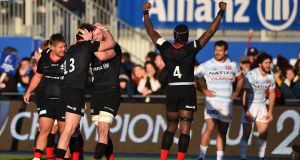 Leinster will host Saracens in the quarter-finals of the Champions Cup while Ulster will travel take on Toulouse on the weekend of April 3rd, 4th and 5th after the lineup was confirmed on Sunday.

After a week of off-field issues which saw Saracens relegated due to financial irregularities, Mark McCall’s side managed to squeeze their way into the last eight where they will face Leinster.

Leo Cullen’s team won all six of their pool matches and are still unbeaten this season. The quarter-final against Saracens will represent a repeat of last year’s final which the English side won.

Meanwhile, Toulouse beat Gloucester 35-14 on Sunday to advance but it wasn’t enough to see them overtake Exeter in the last eight standings, meaning they will host Dan McFarland’s Ulster.

In the other matches, Exeter will take on Northampton at home while Clermont host Racing 92 in a French derby.

A repeat of last year’s final in Newcastle will pack the Aviva stadium three weeks after a Leinster-heavy-Ireland play France in Paris while a Saracens-heavy-England finish their Six Nations campaign in Rome.

Billy Vunipola’s latest arm fracture could significantly diminish the Sarries’ power game as it was the surging number eight that fractured Leinster’s defence the last time they met. Vunipola’s try at St James’s Park effectively decided the game. This meeting will come with near deafening external noise – nothing new there either – but how it turns out will only becomes apparent when the injury count following a attrition-filled three months of Test rugby are tallied. Unmissable all the same as Mark McCall’s team have nothing left to play for now that relegation – for breaching the £7 million salary cap – to the English Championship has been confirmed. The prelude can be seen at Twickenham next month.

Now more than ever English rugby needs this guaranteed representation in the last four. It should be Exeter who progress, having finished the Pool stages with the second best record – racking up 27 points – while Northampton sneaked into the last eight on Leinster’s coattails and really off the back of Lyon’s capitulation. This is precisely where Rob Baxter envisaged the Chiefs progress, competing strongly for domestic and European trophies but doing so inside the salary cap rules. There has been no louder critic of Saracens behaviour than their main rivals Director of Rugby in recent times. The Saints failure to even stay with Leinster at home makes them also rans but a fit squad – that means a return for the Franks brothers and Courtney Lawes alongside Dan Bigggar and Taqele Naiyaravoro – gives them a puncher’s chance, especially if Exeter lose Scotland captain Stuart Hogg or slick centre Henry Slade. But this fixture is the true reflection of the state of English club rugby.

There is precedent for Dan McFarland’s team as Leinster upset the European rugby landscape with a quarter-final victory away to Toulouse in 2005. Ulster have been competent and efficient all season but remain heavily reliant on key players. Injury to any one from John Cooney, Marcell Coetzee, Iain Henderson, Stuart McCloskey, Jacob Stockdale or Will Addison could derail hopes of a performance that survives a second half onslaught from the brilliant and worryingly young French champions. If Antoine Dupont, Romain Ntamack and Thomas Ramos go to another level during the Six Nations – as is expected – it is possible that no team, never mind Ulster, will be able to cope. Still, a fascinating Franco-Irish affair awaits.

The form clubs in Europe this season with French coach Fabien Galthié set to build his Six Nations team around Racing centre Virmiri Vakatawa after overlooking Clermont wing Alivereti Raka. The former recently obliterated the Munster defence while Raka bludgeoned his way through Ulster at Stade Marcel Michelin. That stadium could prove the difference – Clermont are almost impossible to beat there - but there is a steely look to the Parisians this season with Donnacha Ryan at the core of so much of their tactical astuteness. Racing could deeply regret their failure to kill off Saracens but if any team can go to Clermont and win it is them. The stage is set for Simon Zebo, if he can get into the racing XV. – Gavin Cummiskey

Champions Cup quarter-finals (all games to be played weekend of April 3rd, 4th and 5th)

Champions Cup semi-finals (all games to be played weekend of May 1st, 2nd and 3rd)