All in the Game: a drive down memory lane for Gary Lineker 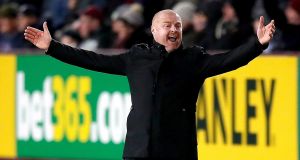 The very best revelation of the week

That’d be the one from Gary Lineker on his Behind Closed Doors podcast when he reminisced about the time, around when he was becoming a Leicester City mega star, that he engaged in a spot of romping in his car with his then girlfriend. And despite the windows being steamed up, a chap tapped on them and shouted: “GARY, WE KNOW YOU’RE IN THERE, LAD!”

How did he know Gary was in there?

Because the sponsored Fiat Uno he was driving had “GARY LINEKER LCFC DRIVES A FIAT . . . SUPPLIED BY KILBY BRIDGE MOTORS” printed on the doors of the vehicle.

Kilby Bridge Motors were probably many things, but subtle wasn’t one of them.

“Strangely, with eight-odd million people in London, I bump into Jose Mourinho! I was on my way to Poundstretchers, by the way - he was on his way to Harrods.” Burnley manager Sean Dyche - whether it’s shopping for players or Christmas presents, his budget pales next to Jose’s.

589 - That’s how many million Euros were paid to agents across the globe for transfers in 2019, a 19 per cent increase on the previous year. Head-in-hands.

“At Porto, we had Hulk, Falcao, James, Moutinho, Otamendi. It was one of the best teams in the world. It was practically pornographic.”- Andre Villas-Boas, currently gaffering at Marseille, drooling while reminiscing about the team he led to a league and cup double, as well as the Europa League.

“Today I read an article that the top clubs want more games in the Champions League. I am absolutely not involved in these plans. That is absolute b*ll***s.” - Jurgen Klopp - and he didn’t say ‘balloons’ either.

“Freddie Stars Ate My Hammers.” - Top class headline from The Sun after Arsenal beat West Ham last Monday, although they ruined it a bit by adding “…..and it could be end of the rodent for Pellegrini”.

When BT Sport’s Jake Humphrey persisted in slagging Martin Keown for turning up late for coverage of Arsenal’s Europa League game against Standard Liege last week, there followed what, by common consent, was one of the more awkward exchanges in the history of awkward exchanges.

“He has given us an excuse that he is stuck on the train,” Humphrey had explained pre-match, “but he has probably gone Christmas shopping! He is probably watching on the app as we speak, in which case: Martin, come on mate, get yourself to work and we’ll get you on the set as soon as you arrive!”

Keown finally made it, but evidently Humphrey had not been told why he was late.

Humphrey: “The fact that you’re late made the national papers!

Humphrey: “They can now write that after sitting there for a couple of hours you’re done!”

Keown: “Someone jumped in front of a train. What was I to do?”

A pair of Christmas Cherries

When it comes to football-related Christmas gift ideas it will, of course, always be tough to top the Paris Saint-Germain fire extinguisher and Benfica dog-poo-bag dispenser, but Bournemouth have a particularly fetching festive offering at the moment that needs to be brought to your attention: it’s a ‘Two Person Christmas Jumper’.

“Stand out from the crowd this Christmas with this brilliant AFC Bournemouth two person jumper,” says their website. “There’s one side for naughty and one side for nice - your choice! Suitable for men and women. The novelty jumper will be a real talking point at pre Christmas parties and get-togethers.”

It certainly will, not least when one of the persons needs to go to the loo.

“Jurgen Klopp is Bill Shankly reincarnated in a German body, because he gets the people.... he gets this city.” - Bruce Grobbelaar’s in love.

“I’m enjoying management. I’m enjoying the tussle of it..... I used to love a tussle. Look at the forwards I played against: Emile Heskey, Duncan Ferguson, Alan Shearer, Les Ferdinand. Every one of those guys was a tussle .... where we are now, it is a massive, gigantic fight. It’s a big tussle.” - Sol Campbell on the, eh, tussle that is managing Southend United.

Napoli club president Aurelio de Laurentiis was initially reluctant to talk about his decision to sack Carlo Ancelotti last week, warning the press at the unveiling of Gennaro ‘Rino’ Gattuso as Ancelotti’s successor, not to raise the issue. “Do not ask me questions, for I will not reply. Not even one. This is the time for Ringhio Starr - that can be his new nickname, Ringhio Starr!”

He relented, though, and explained that he did it out of, eh, kindness. “I am sorry things went like this, but often there are divorces between man and wife and they still keep a good rapport,” he said. “With great responsibility - also not to ruin his extraordinary CV - I tried to safeguard him and say dear Carlo, the time has come to go our separate ways.”

You’d imagine, though, that he’ll be warning Carlo off a return to England - de Laurentiis, after all, is the fella who once declared: “The English live badly, eat badly and their women do not wash their [private parts]. To them, a bidet is a mystery.” If he’s offered the Arsenal job, then, Carlo will have to bear that in mind.

If you thought Liverpool’s current form was down to them having some useful players and a half decent manager, think again. When he turned up on BT Sport at the weekend, Bruce Grobbelaar explained that he is, in fact, responsible for lifting the curse that prevented the Champions-elect from winning the title for 29 years. How?

Poor Alisson, though. Someone give the lad a peg for his nose.

1 Waterford turn Kilkenny upside down and inside out
2 Jim McGuinness: There is a way to save championship and make it competitive
3 Sordid murder of hurling brothers still resonates in south Galway
4 Waterford’s frenzied waves of attacks too much for Kilkenny
5 Klopp furious as injuries mount and VAR decisions prove costly
Real news has value SUBSCRIBE
Crossword Get access to over 6,000 interactive crosswords