Leinster to face Saracens, the opponents nobody wanted 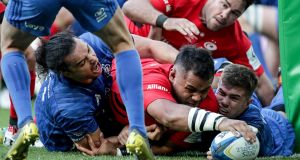 They were the team nobody else wanted to face, or probably even see, in the knock-out stages but, with an almost foreboding inevitability, Leinster’s reward for earning a first seeding in the quarter-final line-up is a reprise of last year’s final against Saracens.

The exact dates and times of the quarter-final ties, to be held on the first weekend in April, should be finalised by the end of this week depending on negotiations involving the various TV rights holders. The likeliest kick-off for the Leinster-Saracens game would be the second game on the afternoon of Saturday, April 4th but that remains to be seen.

Saracens may have been discredited as a club after accepting relegation to the Championship next season for repeated salary cap offences which undermine their recent trophy-laden years and their continuing presence in the Heineken Champions Cup.

However the degree to which this tournament matters for their expensively assembled group of players – who, it must be stressed, are not guilty of any cheating themselves – was ably demonstrated in their 27-24 win over Racing 92 yesterday at a febrile Allianz Park.

Always a team who revelled in an us-against-the-world mentality, once again they thrived in facing all manner of adversity up to and during yesterday’s pool finale.

Fined more than £5million and docked 35 Premiership points for exceeding the cap in the previous three seasons last November, on Saturday evening Saracens admitted they would not come in within the £7 million cap at the end of the season and so accepted relegation from the Premiership at the end of the season for a fourth breach of the salary cap.

Within five minutes of the kick-off they lost talismanic number eight Billy Vunipola to a suspected broken arm and, having led 14-0 and 17-5, they saw Australian lock Will Skelton sent off for a high hit on Brice Dulin before half-time and trailed 24-17 early in the second half.

But this European campaign now effectively represents a last hurrah for this team and a second try by Maro Itoje and a 75th minute penalty by Owen Farrell has earned them a shot at Leinster. With fighting relegation no longer a distraction, Saracens will trail their entire focus on Europe.

Both Leinster and Saracens will be bulk suppliers for Ireland and England in the Six Nations but the Leinster team which completed their unblemished pool campaign with Saturday’s artisan 18-0 win away to Benetton won’t play again together until that quarter-final.

Unhelpfully, in the immediate aftermath of the Six Nations, Leinster’s Pro14 schedule has placed them in South Africa for a two-week tour for games against the Cheetahs and the Kings.

Mindful of how a similar schedule unhinged Munster before the semi-finals two seasons ago, conceivably, one or more of the coaching staff and most of Leinster’s front-liners will remain in Dublin preparing for that Saracens quarter-final.

After completing a Wembley and Aviva double over Saracens in the 2010-11 season, Leinster won their quarter-final meeting at the Aviva two seasons ago by 30-19 but Saracens won last year’s final between the two in Newcastle by 20-10.

By dint of their first seeding, Leinster have at least ensured themselves of a home semi-final should they beat Saracens, and that will be against the winners of the Clermont-Racing quarter-final. Racing’s failure to even hold on for a draw against Saracens has cost them home advantage in that all-French meeting.

In the other half of the draw, Toulouse’s ensuing 35-16 win over Gloucester ensured them of a quarter-final but, despite intense late pressure, left them a try short of a top two seeding. The net effect means Ulster will face a trek to the four-time winners and reigning French champions while Exeter will host Northampton in the other quarter-final.

Ulster do hold a very impressive head-to-head record of six wins, a draw and just two defeats in nine meetings with Toulouse. Admittedly, this includes five wins out of five at home, but their four treks to the Pink City include a 35-all draw with le rouge-et-noir in 2000-01 and a 25-23 win on their last visit there to complete a pool double four seasons ago.

Dan McFarland was also part of the Connacht coaching ticket when they stunned Toulouse there in the pool stages six seasons ago. In the aftermath of Saturday’s 22-15 win over Bath which sealed a place in the quarter-finals away to Exeter or one of the French champions, the Ulster head coach said: “Can’t wait. It doesn’t matter”.

This is their second qualification in two campaigns under a “very happy” McFarland, and Ulster were also given little chance before their quarter-final away to Leinster last season when extending the then champions to the limit.

“I remember we prepared really well that week,” recalled McFaerland. “The coaches put a really good game plan together that week. I think what we’ll take from it is that we’ll go into the preparation and the game itself knowing that we’re in the right place.

“Wherever we go will be a huge ask because at that stage we’ll be going to one of the top four teams in Europe, to their house. If we’re at anything less than our best, it’ll become very difficult.”

Were Ulster to win, they would be either away to Exeter or at home to Northampton in the semis.

In an anti-climactic finale for the other two Irish provinces, Munster at least signed off with a 33-6 bonus point win in their dead rubber against the Ospreys at Thomond Park, with tries by CJ Stander (2), Stephen Archer, Conor Murray and Craig Casey,