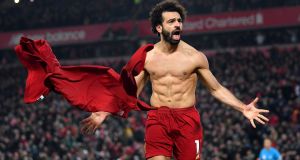 At the end of this 2-0 victory, as the weeks tick down through winter into spring, Liverpool will have something else in their sights now, a feeling of ascent beyond the everyday business of titles and cups.

This was a day that spoke to things beyond the current timeline. No one inside Anfield will want to talk about it. But Liverpool have a shot at a genuine legacy season here. The only real question is whether this extraordinary, adrenal team can win in a way nobody has quite won before.

With a minute left in added time at Anfield Mohamed Salah could be seen surging one more time down the left flank, bumping away the last United defender, setting and resetting his feet, and then punting the ball under David de Gea to kill a game that had spent the previous hour and a half doggedly refusing to die.

The feeling around Anfield at that moment was distinct from the usual triumphalism associated with defeat of Manchester United. As Jürgen Klopp pumped his fist, as the players lined up in an oddly formal crocodile to shake hands there was a feeling for the first time of a step on the victory parade, of this Liverpool team beginning to lap its way grandly around the diamond, high-fiving the bases, that small white ball disappearing out of the stadium and across the skyline.

Liverpool must surely lose a league game somewhere. Common sense and human error dictate it. But after this there are only 16 of them left. Some look tricky. Away to Wolves on Thursday, for a start. The trips to Goodison Park in March and Manchester City away in April. Arsenal away and Chelsea at home in May. But they’re counting down now. And at some point that focus will narrow to a point.

There is a fresh mark to be set here. It may be anathema to the club’s support even to mention it but, should the champions of Europe go on to win the league undefeated, it will be hard to argue against the idea this is indeed the best one-off team of the Premier League era, the best season of all the champion seasons.

There are only so many occasions left to staunch that tide, to put a spoke in the machine. This felt like one of the more obvious hurdles, a visit from the keepers of the recent past. Squint a little and there was at times a vague feeling of ghosts stalking the fringes, a spectral Frenchman, collar up, lurking just out of your line of vision.

And United did play quite well here. Ole Gunnar Solskjær had hinted at a cunning plan for this game, and the change of shape to a three-man backline was a qualified success.

There was evidence of some disruption at the start to Liverpool’s normal patterns. There were beige shirts in unusual positions, an overload in weird spaces, clogging the usual passing lines.

The plan seemed to be working, right up until the moment it abruptly stopped working 14 minutes in, when Virgil van Dijk decided to pull rank. Never mind the tactical dance. Here is a man to whom the ball itself seems bashfully attracted.

Trent Alexander-Arnold’s wing corner was hung with just enough speed to allow Van Dijk to hover briefly above the city of Liverpool and butt the ball high into the net.

Is there a more imposing aerial presence anywhere? Is there a more daunting man-marking task for a 5ft 6in junior left-back in his first game at Anfield? Is there any coherent reason why international defenders would allow this scenario to develop without intervening?

After which the afternoon unspooled into something agreeably haphazard. Liverpool had two first-half goals chalked off. Salah missed a sitter. Jordan Henderson hit the post.

There was a two-minute interlude where Liverpool’s three-man attack squared up against the three-man defence and basically stalked them back into their own penalty area, like battle-hardened mountain wolves closing in on a flock of geriatric sheep. For about two minutes late on Fred appeared and briefly ran the game, zipping passes about, pirouetting in space, before vanishing completely from this earthy plane.

At the end of which Liverpool march on towards something that feels close enough now to put into words. They have at least found assorted ways to win. This was their seventh successive clean sheet in the league, a new element of rigour for a team that looked to be vulnerable at one stage but now has not conceded a goal in the Premier League since the first week of December.

It is that solidity that looks most ominous for every other champion team of the recent past. Sixteen games to win them all, to take a shot at the ultimate, a reward not just for the surging energy of this team but for success stretching back far beyond the pitch, a feeling of thoroughbred expertise in every aspect of this club, from intelligence-driven recruitment to the cult of the Klopp personality. From here you really wouldn’t bet against it. Guardian