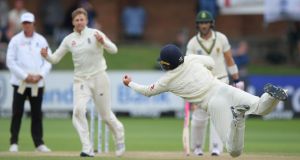 There has been much talk of Joe Root’s consistency since he has been made England captain but here in Port Elizabeth he has been landing the ball on a length often enough to cause his opponents great concern. Root, the off-spinner, conjured four vital wickets in the second half of another grey day and his side is on the verge of another victory. At the close South Africa, who were compelled to follow on 290 runs behind, were languishing on 102 for six and in desperate need of a lot more rain on the final day to escape with a draw.

Bowling around the wicket Root propelled fast off-breaks, sometimes close to 100km/h; the ball gripped and turned often enough to torment frontline batsmen. There was nothing flukey about his dismissals; either he found the edge of the bat or the middle of the pad against players who were usually defending dutifully.

Figures of four for 31 were comfortably his best in Test cricket and such a performance offers fresh scope for the forthcoming tour to Sri Lanka. Like another Yorkshireman who captained England, Ray Illingworth, Root could end up bowling quite a lot when the ball is turning.

While Root was taking his wickets, Dom Bess, the first innings hero, was playing the Tony Lock role of Manchester 1956, though he looked more bemused than exasperated that his captain was causing so many more problems than he was.

Root took his four wickets in an unbroken spell of 19 overs throughout the afternoon. In the morning England needed just 4.4 overs to take the last four wickets of South Africa’s first innings. This set up their victory charge perfectly especially since the Eastern Cape has recently been enveloped in cloud and showers abound.

The tail was blown away in spectacular fashion – the stumps were splattered three times – by Stuart Broad with one vital assist from Sam Curran. The fifth ball of the day from Broad nipped back and passed through the considerable gate (note the spelling since we must not cause offence) of Vernon Philander before knocking a stump out of the ground.

In the next over Curran followed suit; his delivery was not quite so devious but Quinton de Kock pushed forward casually and once again the ball sailed through a wide space between bat and pad. In Broad’s next over Keshav Maharaj was also bowled, off the bottom edge. South Africa were sinking fast in what was a titanic start for England.

Kagiso Rabada produced the solitary run added to South Africa’s overnight score before driving straight to mid-off. This deprived us of a long look at Dane Paterson, which may have been a pity. Apparently Dane bats like a rampaging Viking and he has the figures of an old-fashioned tailender to prove it. In his first-class career he has scored 1171 runs and 852 have come from boundaries, 69 of which have been sixes.

After such a stunning start even Broad must have been keen to enforce the follow-on – he has never been a keen proponent of that strategy – and Root had no hesitation in doing so. South Africa had mustered 15 without loss when rain intervened for two and a half hours.

On the resumption Mark Wood took his first Test wickets since playing against West Indies 11 months ago. The quality of all that practice in the nets or on a lonely square has been demonstrated. Despite no first-class cricket since that match in St Lucia Wood was in rhythm and on target in the first innings. Here in the second he found some reward, having already discomforted the upper order.

Another Wood delivery in excess of 90mph brushed the outside edge of Dean Elgar’s bat before removing his off-stump. Then he removed Zubayr Hamza who was caught down the leg-side by the wicketkeeper; this happens so frequently now that the notion of a “strangle” should be banished. By doing so Wood has probably removed Hamza from the team for the time being. Temba Bavuma may well be recalled now.

Root’s first wicket came just before tea, when Pieter Malan, who had been batting so slowly that he made Dominic Sibley seem like a modern Barry Richards, pushed forward to a delivery that turned enough for him to be lbw. After the break, England, in their excitement, squandered two reviews in 19 balls when Root (over-excitement) and Bess (inexperience) spied lbws that were never there.

However such wastefulness did not deter Root from bustling in from the Duckpool End against batsmen uneasy against the fast spinning ball. Rassie van der Dussen pushed forward and the bat-pad nick required Pope to dive full stretch to his left to take the catch. Wood’s effort at backward point to catch De Kock off Root was in the same class; he had to leap high to pluck the ball out of the air. Next Root dispatched Faf du Plessis in classical fashion, via another catch at short leg by Pope, who is destined to field there for a long time now.

Apart from the silly reviews there was one strange blemish just before the close when a relatively straightforward chance from the bat of Philander was dropped by Ben Stokes at square leg off the bowling of Wood. It seemed as if Stokes did not see the ball, which ended up striking his ribcage.

He was furious with himself but for some reason there were very few stern looks from his colleagues – just surprise that he had dropped another one. Otherwise all smiles in the England camp at the discovery of another demon off-spinner. – Guardian