TV View: Not every day a Tesco delivery disrupts a Bundesliga broadcast 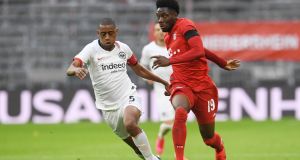 It was his BT Sport colleague Ian Darke who explained why Paul Dempsey fell temporarily silent during his commentary on the Bundesliga game between Borussia Dortmund and Schalke last week, the problem not, as most of us assumed, a technical hitch, rather the arrival at his home, from where he is doing his commentaries, of a Tesco delivery man laden with groceries.

And with very little noise emanating from the crowd-less stadium over in Dortmund, the Tesco man’s pounding on Dempsey’s front door was becoming increasingly audible. Our commentator had, then, to mute himself while letting his groceries in, no doubt interrupting the Tesco man’s chat about the weather with a shrieking “I’M BROADCASTING LIVE TO THE BLOODY PLANET!”

Some questioned why he hadn’t chosen a delivery slot that didn’t clash with the match, but most us just wondered how he’d managed to get one at all, especially those of us who haven’t been able to secure a slot until the third week in October.

But, unlike the rest of us, Dempsey is performing an essential service, so he deserves priority slots, the fella bringing us live football just at a point when we wondered if we’d ever see it again.

And if he’s being paid by the hour he’ll be able to buy Tesco soon enough, Dempsey on double-bill duty again on Saturday and Sunday.

Saturday’s games were Wolfsburg v Dortmund and Bayern Munich v Eintracht Frankfurt. For the first, Steve McManaman was his companion, Martin Keown for the second. Not actual physical companions, mind, both lads working from home as well.

This, of course, creates its own set of challenges – Dempsey, for example, not able to elbow Maccer when he noted that “this is a typical Dortmund Schalke game”, despite Schalke not being on the actual pitch. And when Martin confused Kingsley Coman with Alphonso Davies and Alphonso Davies with Kingsley Coman every time one or the other appeared on his screen, he wasn’t able to poke him in the eye.

Now, there have been those who have been unkind enough to suggest that Maccer and Martin know as much about German football as they might do about, say, nuclear physics. Although in Maccer’s case it seemed he might have forgotten everything he ever knew about the game during lockdown, no matter where it’s played, telling us that “it’d be good if both teams could get the win here today”.

But he did sound exceptionally relieved when Emre Can replaced the injured Mats Hummels at half-time because Can once played for Liverpool so he’d heard of him.

Before then, though, he was singing the praises of the Schalke ... no ... Wolfsburg rearguard, hailing them as “defensively solid”. Roughly a nanosecond later, Raphael Guerreiro opened the scoring for Dortmund, at which point Maccer declared that “it’s been coming – Wolfsburg have been too easy to play through”. Because they were in their respective living rooms, Maccer wouldn’t have seen Dempsey’s eye roll.

Mind you, Dempsey didn’t have a glitch-free afternoon either, telling us that Bayern’s Robert Lewandowski had “drawn a blank” not long after he’d scored his 875th of the season to make it 3-0. All you could reckon was that Tesco man had come knocking again just as Lewandowski was teeing up his header.

Anyway, both Dortmund and Bayern won, keeping the title race tasty, Dortmund not at their best, but job done. As Raphael Honigstein put it back in the studio, “a good horse only jumps as high as it has to”. Our host James Richardson liked that, as he did Honigstein’s observation about another of the day’s games, “Borussia Monchengladbach had 18,000 cardboard fans, but it was Bayer Leverkusen who made them look two-dimensional”. Boom.

It’s all still taking some getting used to, but what’s it they say? We are where we are. Besides, nothing will ever be stranger than that moment in British Health Secretary Matt Hancock’s press conference last week when he was taking questions from members of the public and the immortal line “we go now to Robbie Savage” was uttered. If it’s Jason McAteer grilling Simon Harris this week, we won’t even blink. Things can’t get any weirder.