Tipping Point: Sporting lockdown will only highlight its importance to our lives 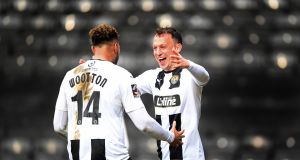 Everything finds its level. Sport got put in its place last week, snuffed out across the globe like an altar boy’s candle after mass. The pandemic is scary and deadly serious and not to be trifled with. So sport pulled stumps, as was only right and proper.

To many, this can be taken as final proof of the essential throwaway nature of it all. Anything the world can put the brakes on that quickly can’t, by definition, be all that important. Which is one way of looking at it, granted.

It’s a small way, though. A dogmatic look through a lens so narrow that it blocks out the world around you. The actual truth is the polar opposite, in fact. The planet stopped playing not because sport is expendable but because it is vital. Only something as routine and ingrained and key to the DNA of the human race could make such a difference by taking a collective step back.

In the coming weeks and months, you’ll hear plenty about how this has put sport in perspective. Damn right it has. Too much f**king perspective, as the Spinal Tap lads would say. By the time everything starts up again, the role sport plays in families, in society, in the general running of the whole show will never have been made more obvious.

In the meantime, it does rather leave the sports departments of your beloved media institutions a little content-deficient. Whatever about the rest of us, spare a thought today for the poor folk on Sky Sports News. It’s sport by Beckett just now, where nothing happens, twice every 15 minutes.

During a brief check-in on Saturday evening, they were to be found devoting time to a row in the National League (the Vauxhall Conference in old money) with Ben Strevens, the manager of lowly Eastleigh, raging that their game against Notts County had gone ahead “because the board of the National League only care about money”. They dealt with it in detail too, pointing out that the 4,942 attendance was the biggest football crowd in England on the day and giving the big yellow Breaking News tag to a quote from Strevens himself.

“It’s not the players – they’re young and fit and they’re fine,” Clare Tomlinson read out from his salvo. “They didn’t think about the wellbeing of the spectators. And it’s not only the supporters – we’ve got a kitman who is an old boy.”

At which point, you nearly had to stand up and applaud SSN for managing to unearth the last remaining aggrieved manager taking the last aggrieved stand in world sport. At least the last for a while. A dying wasp reminder of what we’re going to have to do without for the foreseeable future.

It’s going to be weird, isn’t it? It’s weird already. A world with no sport is unimaginable and unprecedented and here and now and real. Whatever about those of us who watch it, the whole thing has to be surreal for those who play it to any reasonable level. Having the tap turned off like that must be such a strange feeling for the people involved.

Without sport, who are they? The vestigial pinball of their natural sporting urges has to be bouncing around in them. Go for a run, fine. Do your gym stuff alone in the garage, grand. But without competition, without the essential two-flies-climbing-a-wall of it all, it’s got to feel like so many empty calories.

What are they doing to cope? Is Mo Salah just walking around his house with a ball, jinking in and out around the furniture? Has Tadhg Furlong built a tackle bag out of pillows and a sleeping bag and is he milling into it over and over on his bed? Is Roger Federer serving boiled eggs to his children with elegant backhand drop shots over the kitchen island that land softly into their egg cups? (Okay, he probably does that anyway).

Who will Johnny Sexton bollock on weekends? Are referees calling one-by-one to Davy Fitz’s back garden so that he can give out to them through the kitchen window? What will social distancing mean for Andy McEntee’s half-time and full-time walks alongside the officials? Is the Meath manager spending this time walking along a wall with a sweeping brush held out to the side, perfecting the right yardage from which to whine when it all starts up again?

There’s a lot of tree-falling-in-the-forest stuff to consider here. If Saracens have nobody to cheat, do they really exist? If GAA coaches on the brown envelope circuit have no clubs or counties to fleece, what happens to all that spoof? If there are no matches to play or fine messes to get into, is the FAI even a thing?

What will totalitarian regimes use for respectability now that there’s nothing to sportswash with? Will racists sit at home monkey-chanting at the bathroom mirror? What percentage less sweaty are we talking when we consider the sweatshops that produce all that sports equipment? Will it be 30 per cent? 50? Five?

It’s a new world too for all the agents and grifters and spivs to whom sport has offered such a warm and welcoming home. Now is the time to take stock, to sit and sketch out what the play will be when the money tap starts flowing again. Deals to be made, loopholes to be exploited. Never waste a good crisis, chaps. Get in there.

Do dopers still dope even when there’s nothing to dope for? Do testers still test? Nobody knows if there’ll be an Olympics or a Euros or a Championship or anything for the rest of the year. Do you continue your, eh, training regime as planned or do you change it up to suit a new schedule that may or may not be in the offing?

Yeah, sport is great and everything. We know that. Sport is grim and rotten as well, a place for the worst of us to make out like bandits and for the thumb-on-the-scale merchants to prosper. We know that too.

Most of all, we know we’d give anything for this all to be over and to be living in a safe world, happy to be disgusted by sport once again.