Olympic boxing qualifiers continue but uncertainty continues for many athletes 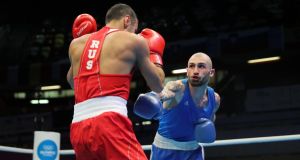 Whatever about the sense and especially the risk of the European Olympic boxing qualifiers happening in London over the coming nine days there is increasing uncertainty for many athletes about their path to the Tokyo Games in July – assuming they still go ahead as planned.

As unlikely as it sounds in the face of Covid-19, some 300 boxers from 40 different European nations (some of which are already under lockdown) are coming together inside the Copper Box Arena in London, the first qualifying bouts already completed on Saturday, with four Irish boxers due in the ring later on Sunday.

The Local Organising Committee have insisted it’s safe for the qualifier event to proceed as planned “following the latest advice provided by the government and Public Health England”, although with more than just droplets passing between the boxers many observers are suggesting otherwise. There is a final Olympic boxing qualifier event set for Paris in May, and it’s more likely that won’t happen.

In the meantime the Irish Athletic Boxing Association (IABA) has sent a team of 13, eight men and five women, all with Tokyo qualifying on their minds. Due in the ring on Sunday is light-welterweight George Bates, light-heavyweight Emmet Brennan, welterweight Christina Desmond, and heavyweight Kiril Afanasev.

On Monday, Brendan Irvine and Kurt Walker are due in the ring needing only one win to secure their spot in Tokyo. Irvine, the only Irish survivor from Rio four years ago, received a bye into the last 16 of the flyweight class, and only Hungary’s Istvan Szaka stands between him and a second Olympics.

Likewise with Walker, the European Games champion from Minsk last summer, who is seeded second in the featherweight class, and also received a bye into the quarter-final, a win there securing his place in Tokyo. In all, 50 Tokyo places for men and 27 for women are being decided in London, again on the assumption that Tokyo will still happen in July as planned.

Despite Japan’s prime minister Shinzo Abe insisting again on Saturday that “we will overcome the spread of the infection and host the Olympics without problem, as planned” the uncertainly is growing not just among the athletes but also their coaches and agents.

Derry McVeigh of Silver Hatch Sports, the agency representing athletes and talent in Ireland and the UK, has a number of potential Tokyo Olympians on his books, including Kurt Walker. Some, like 50km race walker Brendan Boyce and rower Sanita Puspure, have already qualified for Tokyo, while others such as 800m runner Mark English and sprinter Leon Reid are looking towards the last window of qualification in May and June.

“The approach that every athlete has to take is to push ahead as normal, even if this is for an Olympics that might not happen in July,” says McVeigh. “For athletes who have qualified, the main obstacle now is to get races or the training camps that were part of the plans for Tokyo. With the cancellation of key events which they might be using as performance indicators, we may have to carry them out ourselves, say with a group of walkers.

“Or if say they were going to a training camp, what happens if those areas are put in lockdown? The high-performance directors of each sport have their own way of dealing with this too, but it is changing all the time. All you can say to them is to keep calm.”

The situation in athletics is further complicated by the fact World Athletics introduced new qualifying criteria for Tokyo: as well as qualifying times, a number of places will be filled by a quota, based on world rankings, with the likes of 400m hurdler Thomas Barr and 200m runner Phil Healy among those in qualifying spots.

Many of those quotas were set to be decided on the Diamond League meetings in the coming months, beginning with in Doha on April 17th, then Shanghai (May16th), Stockholm (May 24th), Rome (May 28th) and Rabat (May 31st), all under serious threat of being postponed. The closing date for qualification for the track and field events is June 29th.

“On the qualification rankings, I think some confirmation has to be made over the next week or so,” says McVeigh. “Right now you have some athletes qualified on ranking, trying to hold that spot, and others trying to get into that spot. They might have to look at the ranking quota again, cut it off earlier, which might be harsh on some athletes, simply because the rest of the qualifying events might not go ahead.”

Seán Tobin and Aoife Cooke had been eying Olympic marathon in the coming weeks, in Hamburg and Vienna, those races originally set for April 19th, both postponed last week due to the coronavirus. The deadline for Olympic marathon qualification remains set for May 31st, when it’s highly unlikely there will be another big-city marathon before then.

Over the weekend, all international rowing events from March through May were called off by Fisa, the world governing body. This removes the Lucerne World Cup and the Olympic Qualification regatta at the same venue, both set for May, from the planned programme for the Ireland squad in the final qualification process – and a decision on how and when the rowers will be selected must now be agreed.

The ultimate decision on Tokyo still rests with the International Olympic Committee (IOC): “I can understand why they’re holding on as long as possible,” says McVeigh, “when some countries have locked it [Covid-19] down, or maybe got a handle on it, at least in the countries that have shown real leadership. You’re dealing with it a day-to-day basis, but if we do get an Olympics, I think it will be the biggest celebration of sport in a long while.”

1 Royal Portrush: Golf clubs ‘in real distress’ as eyes turn to 2021
2 Colin Kaepernick’s exile is too fresh for NFL to speak out on US protests
3 Vincenzo Iaquinta sentenced to two years in prison after mafia trial
4 Ghosts and goalposts: The soul of street football in Dublin’s Gloucester Diamond
5 Connell losing touch with club championship is real tragedy of Normal People
Real news has value SUBSCRIBE